In December 1832, Andrew Jackson issued his Nullification Proclamation, one of the most consequential actions of his presidency. Nullification—the authority for individual states to nullify federal laws they find unconstitutional within their borders—gathered great support in the southern states in the early 19th century. Jackson’s leadership in this crisis forestalled secession by nearly 30 years. 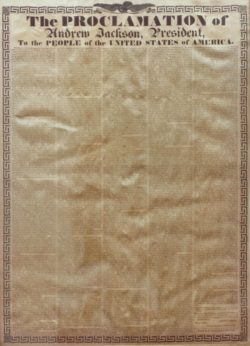 The Nullification Proclamation inspired few tangible artifacts, so from a collections point-of-view, it is somewhat difficult to illustrate. Jackson hung this silk copy in his library in the Hermitage, one of the three documents framed in heavy gilt frames that Jackson displayed as mementos of his presidency.

In 1832, the dispute over tariffs and nullification had been brewing for some time. The federal government passed protectionist tariffs on foreign goods to guard emerging industries located primarily in the north. Some of the residents of southern states who sold their cotton on the world market wanted access to foreign goods at lower prices, so they greatly resented these tariffs. The tariff passed in 1828 was particularly odious and became known as the Tariff of Abominations. Support for nullification gained support from this resentment.

Jackson’s first term Vice President, John C. Calhoun of South Carolina, was the leading proponent of nullification. He had written the South Carolina Exposition and Protest in 1828, which argued strongly against the Tariff of 1828 and proposed nullification—the interpretation of the Constitution that the federal government was formed through a compact of the states and that this gave the individual states authority to nullify laws they saw as unconstitutional—as a solution. The pamphlet was published anonymously although Calhoun’s authorship was generally known. Because of his position as Vice President, he could not publicly support nullification.

The Webster-Hayne Debate in 1830 between New Hampshire Senator Daniel Webster and South Carolina Senator Robert Young Hayne highlighted the sectional nature of the controversy. Since as Vice President and President of the Senate, Calhoun could not take place in the debate, Hayne represented the pro-nullification point-of-view. 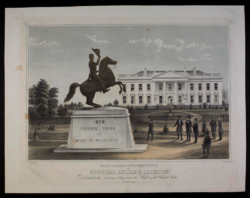 Jackson’s Jefferson birthday toast became one of the lasting reminders of the Nullification Crisis in the public mind. It is shown here on the base of the Jackson equestrian statue across from the White House.

Andrew Jackson, generally in favor of states’ rights, saw nullification as a threat to the Union. In his view, the federal government derived its power from the people, not from the states, and the federal laws had greater authority than those of the individual states. Jackson had not publicly stated his position, and many thought that, as a Southern cotton planter, he would side with the supporters of nullification. But in April 1830, at a dinner honoring Thomas Jefferson’s birthday, the nullifiers presented multiple lengthy toasts supporting their position. When President Jackson had his turn, he made the simple toast “Our Union, It Must be Preserved.” He had intended to say, “Our Federal Union. . . ,” and that is how the toast is quoted. In this way, Jackson told those who supported nullification that he would not allow the Union to be destroyed.

The issue simmered along until Congress passed the Tariff of 1832, which brought no relief to the South Carolina position. Calhoun resigned as Vice President during the summer of 1832, feeling that he could best support nullification as a Senator. South Carolina passed the Ordinance of Nullification in November. That Ordinance declared the Tariff Acts of 1828 and 1832 unconstitutional and null and void within the borders of the state.

President Andrew Jackson took immediate action. He outlined his position to Secretary of State Edward Livingston, who helped draft the text of the proclamation issued December 10, 1832:

“I consider, then, the power to annul a law of the United States, assumed by one State, incompatible with the existence of the Union, contradicted expressly by the letter of the Constitution, unauthorized by its spirit, inconsistent with every principle on which It was founded, and destructive of the great object for which it was formed…”

Later in the document he makes the stirring statement “Disunion by armed force is TREASON.” 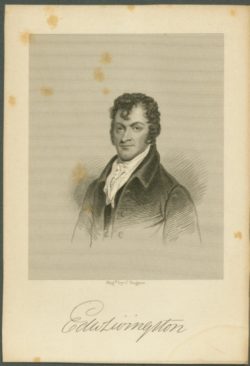 Secretary of State Edward Livingston of New York and Louisiana

Former Senator Hayne, by then the governor of South Carolina, began to organize an armed resistance to the collection of the tariff. Congress passed the Force Bill in early 1833, which allowed the President to send armed troops to enforce tariff collections. At this delicate point, Senators Henry Clay, Daniel Webster and John C.  Calhoun negotiated a compromise Tariff of 1833 which allowed both sides to back down. South Carolina repealed its Ordinance of Nullification. 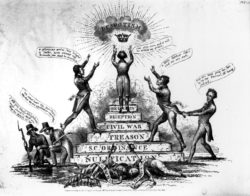 One object The Hermitage does not have in our collections is this pro-Jackson political cartoon which shows what Jackson thought nullification might logically lead to–Despotism. The levels in the cartoon show the steps on the road to that end. The Constitution and E Pluribus Unum have already been stabbed, and Jackson desperately holds the coat tails of one of the men who want to rush up the steps.

Jackson’s handling of the Nullification Crisis influenced President Abraham Lincoln as he faced the Civil War. Jackson commented on the crisis to his cousin Andrew J. Crawford in May 1833: “I have had a laborious task here—but nullification is dead, and its actors & exciters will only be remembered by the people to be execrated for their wicked designs to sever & destroy the only good government on the Globe, and that prosperity and happiness we enjoy over every other portion of the world.” It is interesting to note that a copy of this letter was given to Abraham Lincoln. 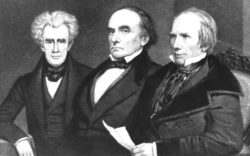