Andrew Jackson and the Bank War 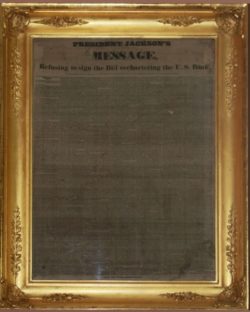 Hanging on the wall in Andrew Jackson’s library at The Hermitage are framed copies of three documents printed on silk. Printing on silk was a common practice among printers during the Jacksonian era to create a commemorative copy of a particularly important document. Jackson’s three documents are highlights of his presidency – his first message (or State of the Union) to Congress, the Nullification Proclamation and the message to Congress concerning the veto of the re-charter of the Bank of the United States. This re-charter led to the Bank War, the name given to the campaign Jackson began in 1832 to decentralize the Bank.

Although it seems odd to us, Dan Feller, editor of the Papers of Andrew Jackson, says that the system of banking and monetary policy in the early United States was not well established. In an article about Jackson and the Bank in Humanities (January/February 2008), he said “…in its day, nothing galvanized American political conflict more than banking, currency and finance. In the republic’s first half-century, no subject, save foreign relations and war, gave greater vexation to American statesmen or aroused more heated public debate.” 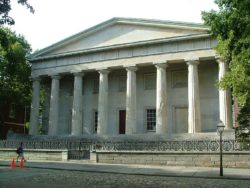 The headquarters of the Second Bank of the United States in Philadelphia was designed by William Strickland, who also designed the Tennessee State Capitol. 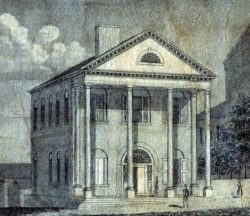 By the mid-1820s, the Second Bank of the United States had established branches throughout the country, including one in Nashville. The president of the Nashville branch was merchant and Jackson friend, Josiah Nichol, and board members included other friends, George Washington Campbell and William B. Lewis. This image of the Nashville branch, which stood on Public Square, comes from the 1831 Ayres map of Nashville hanging in the hall outside Jackson’s library.

Although the Bank charter ran through 1836, anti-Jackson politicians persuaded Bank President Nicholas Biddle to petition for an early re-charter prior to the election of 1832. They believed that Jackson would not veto the re-charter, and if he did, his anti-bank position would give them an issue in the election. The charter passed both houses of Congress, but one week later, on July 10, 1832, Jackson issued his veto message, one of the most important documents of his presidency.

The veto was unprecedented. Previous presidents had vetoed bills sparingly and only on the basis of their constitutionality. Despite the Supreme Court’s ruling that the Bank was constitutional, Jackson challenged the charter on that issue as well as philosophically. Attorney General Roger Taney and Kitchen Cabinet member Amos Kendall wrote most of the text, but the ideas were Jackson’s. In the message, Jackson outlined his positions for the veto. One of the most famous passages of the message comes near the end:

It is to be regretted that the rich and powerful too often bend the acts of government to their selfish purposes. Distinctions in society will always exist under every just government. Equality of talents, of education, or of wealth cannot be produced by human institutions. In the full enjoyment of the gifts of Heaven and the fruits of superior industry, economy, and virtue, every man is equally entitled to protection by law; but when the laws undertake to add to these natural and just advantages artificial distinctions, to grant titles, gratuities, and exclusive privileges, to make the rich richer and the potent more powerful, the humble members of society–the farmers, mechanics, and laborers–who have neither the time nor the means of securing like favors to themselves, have a right to complain of the injustice of their Government. There are no necessary evils in government. Its evils exist only in its abuses. If it would confine itself to equal protection, and, as Heaven does its rains, shower its favors alike on the high and the low, the rich and the poor, it would be an unqualified blessing. In the act before me there seems to be a wide and unnecessary departure from these just principles.

Although the bill to re-charter the bank had passed in Congress, it did not have enough support to overcome the veto. Jackson’s veto of the bill was the first step in a several year process to “kill” the hated Bank. The Bank continued to function until the charter expired in 1836. In response to the veto, Bank President Nicholas Biddle severely restricted the Bank’s loans. This was in an effort to anger the public about the veto. To hasten the end of the bank, Jackson ordered the U.S. government deposits (20 percent of its funds) be withdrawn and deposited in state banks so the state banks could make the loans the Bank had stopped making. 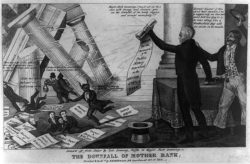 This pro-Jackson political cartoon from 1833 applauds the removal of the deposits. The Hermitage owns a copy of this print. 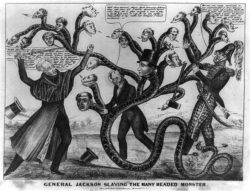 This satirical cartoon, which is not in the Hermitage collections, shows Jackson fighting the Bank and its branches, which Jackson described as a many-headed monster. 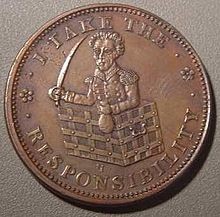 During the Bank War and the resulting economic downturn, businesses and others issued tokens called by coin collectors “hard times tokens.” There are several of these tokens in The Hermitage collection which poke fun at Jackson and the banking issue.

Although Jackson was successful in shutting down the bank, historians give mixed reviews to the results.  Bank President Nicholas Biddle’s loan restrictions tightened the monetary supply and Jackson’s veto of the bank charter and the removal of the federal deposits to the State Banks helped lead to the Panic of 1837. However, Andrew Jackson and his distrust of power in the hands of a privileged few extended the meaning of American democracy to the farmers, mechanics and laborers – not just the merchants and the bankers.