This month marks the 150th anniversary of the end of the Civil War and of President Lincoln’s assassination.  However, it marks another 150th anniversary much closer to The Hermitage:  Andrew Jackson Junior died on Monday, April 17, 1865, after a hunting accident on the previous Monday. According to Sarah Jackson who wrote to Andrew Jackson III, then a prisoner of war at Fort Warren in Boston Harbor, “his foot struck the trigger and the whole load of one barrel passed through his right hand…”  Tetanus (or lockjaw) developed on Saturday, April 15 and he died two days later. 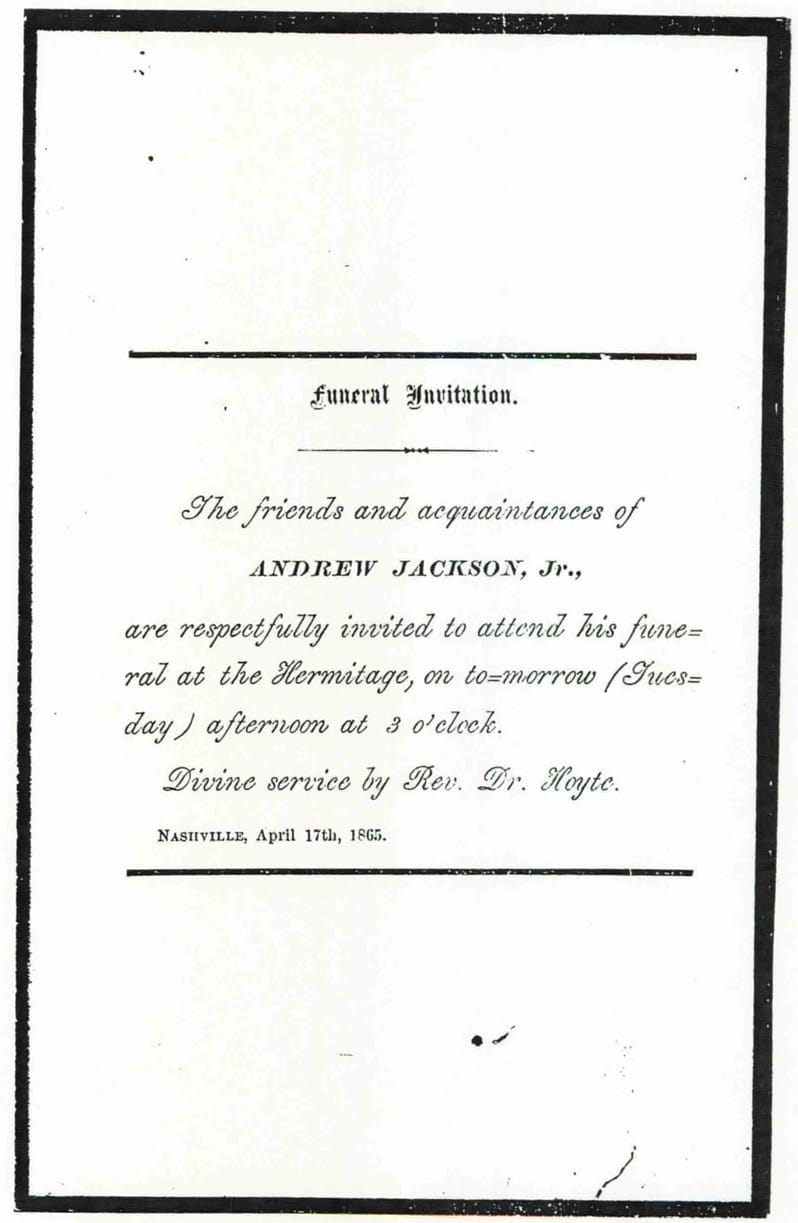 Rachel Jackson’s brother Severn and his wife Elizabeth Rucker became parents of twin boys in December 1808.  Through the years, many reasons have been suggested for their decision to split up the twins and allow Andrew and Rachel Jackson to raise Andrew as their son and heir.  There is no contemporary documentation to clarify the matter.

Though some sources say the Jacksons brought the child home just a few days after birth, the first written record of Andrew Jr. in the Jackson household is in medical accounts beginning in October 1809.   They never adopted him in the legal sense that we know adoptions today. 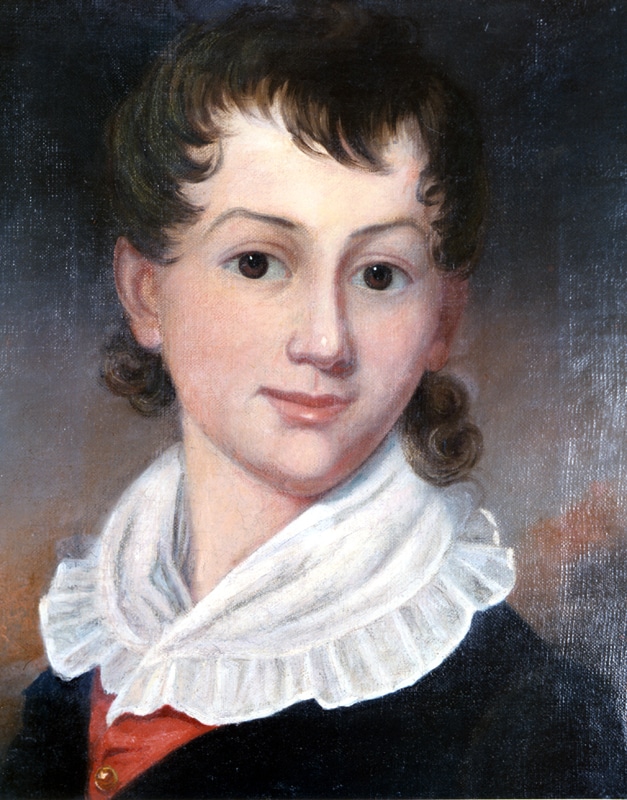 He did not grow up alone.  When he was younger, his cousins John, Andrew, and Daniel sons of Rachel’s brother Samuel lived at The Hermitage and later his cousin Andrew Jackson Hutchings and Lyncoya joined the family.  But Andrew Junior was clearly the Jackson’s son from the beginning and Andrew and Rachel Jackson quickly became devoted to him.

Andrew was educated in Nashville at Cumberland College, where his father was a trustee, and at the University of Nashville, its successor institution. There are over twenty books in the Jackson family library that were Andrew Junior’s schoolbooks and show the kind of classical education he received.  Receipts from this time suggest he was already something of a spendthrift. 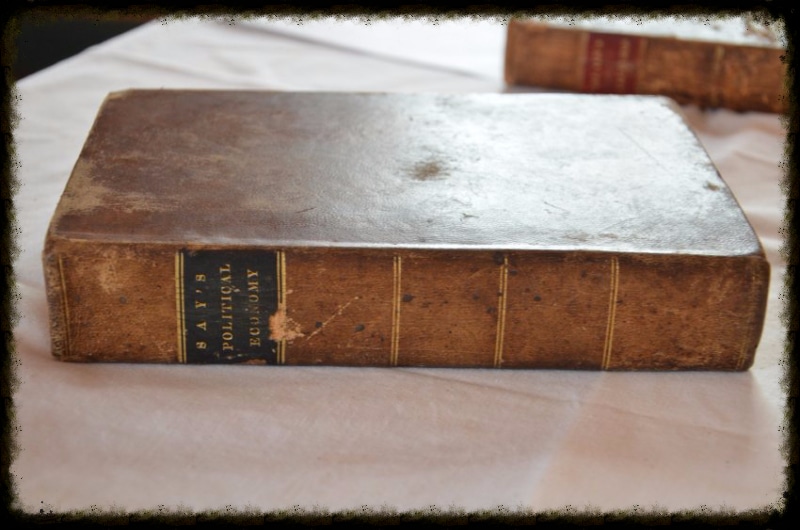 Andrew’s economics text from the University of Nashville, J.B. Say’s Treatise on Political Economy. Andrew inscribed in the front: Andrew Jackson jr University Nashville May 18, 1828, Pabulum Mentiz The Latin which is mis-spelled means roughly, “food for the mind.”

Andrew was barely 20 when Rachel Jackson died and his father became President of the United States. He went to Washington for the inauguration but returned to Tennessee to manage The Hermitage, although he made several trips back to Washington. President Jackson wrote frequently asking questions and offering advice, and to his frustration Andrew did not answer as promptly as Jackson wished.

In addition to farming, Andrew was also pursuing matrimony. He had a couple of unsuccessful relationships.  The dates of these suggest his courtship of Sarah Yorke was rather brief.  Jackson and Junior were corresponding in the fall of 1830 about a girl named Flora, and just over a year later Andrew had met and married Sarah Yorke.

When Andrew and Sarah returned to The Hermitage from a visit to Washington, Sarah’s cousin Emma Farquhar traveled with them.  Back in Tennessee, she met and married Andrew’s biological twin brother Thomas Jefferson Donelson. 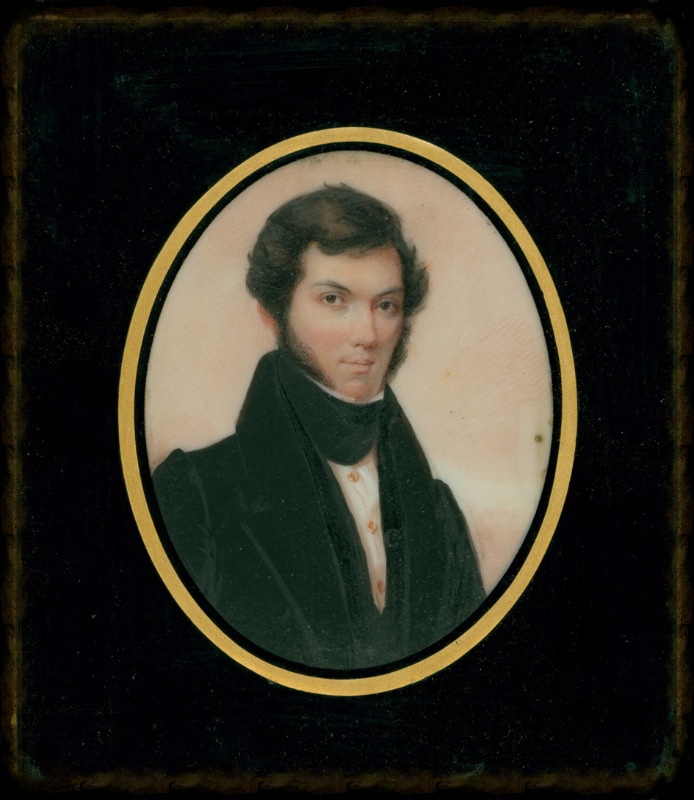 Andrew remained nominally in charge of The Hermitage during the rest of Jackson’s term in office but after the house fire in 1834, Sarah and their children moved to Washington.  Andrew Junior went back and forth, but when Andrew Jackson Donelson resigned as Jackson’s secretary to return to his dying wife Emily in Tennessee, Jackson appointed Andrew Junior secretary.  Jackson’s Nashville friends kept an eye on Hermitage affairs as they had all along. 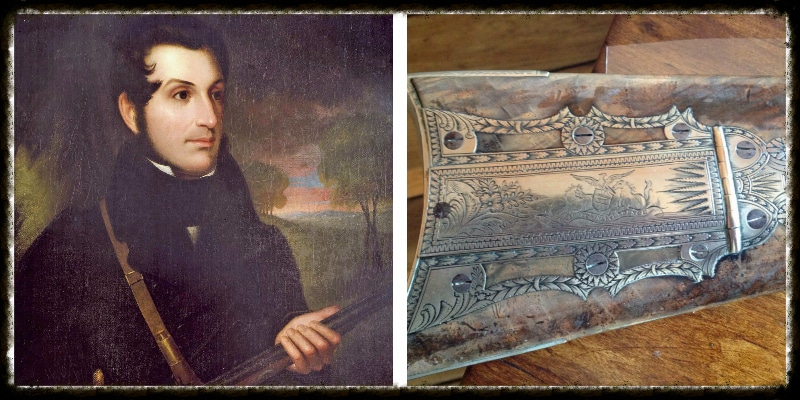 Ralph E.W. Earl’s portrait of Andrew Jackson Jr. painted in the early 1830s shows him ready for his favorite activity, hunting. We own few of Junior’s personal possessions but we do own his expensive Deringer rifle.

During the remainder of Andrew Jackson’s life, he tried to manage the affairs of Andrew Jackson Junior with little success. Even under his father’s watchful eye, Junior managed to accumulate debt. Despite Andrew Jackson’s nagging, advice, worry and fears for his son, Jackson always forgave him and tried to help him find a way out of the situations he made.

Illustration of Andrew Jackson Junior from Leslie’s Weekly in September 1857 whenhe traveled to New York for the presentation of his father’s gold box.

After Andrew Jackson’s death, Andrew Junior’s fortunes collapsed.  He signed promissory notes, made unnecessary purchases, and invested in a lead mine and ironworks in Kentucky, as well as plantations in Mississippi and Louisiana.  He sold The Hermitage to the state of Tennessee in 1856 to finance some of these ventures, but by the beginning of the Civil War, things had reached a very low point.  Andrew Junior’s death at the end of the war left his wife, Sarah, and son, Andrew III, to struggle alone in a very different world.