Annual event will also include donation drive for tornado victims

In celebration of Andrew Jackson’s 253rd birthday, The Black Abbey Brewing Company is partnering with Andrew Jackson’s Hermitage to bring back the Hermitage Farmhouse Ale. The beer will be available at The Hermitage’s annual event for Jackson’s birthday on Sunday, March 15. This event, which offers half-price general admission, will include complimentary beer samplings from 1-3 p.m. for ages 21 and up with a valid ID. 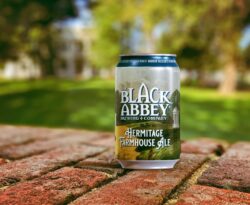 “Andrew Jackson’s birthday is one of the most popular events for visitors of The Hermitage. It’s a great day to visit the site for half price and participate in the numerous family-friendly activities taking place throughout the day, including the supply drive for victims of the tornado,” said Howard J. Kittell, President and CEO of the Andrew Jackson Foundation. “We are so grateful to Black Abbey for bringing back Hermitage Farmhouse Ale and supporting the historic preservation projects that The Hermitage has maintained since its public opening in 1889.”

Hermitage Farmhouse Ale is a Belgian-style Saison with ingredients that pay tribute to the life of Andrew Jackson. Malt was sourced from North Carolina—Jackson’s birth state—and juniper berries are symbolic of Jackson’s love of gin. Additionally, the beer includes a grain bill, which is based on manifests from the general store located on The Hermitage property during Jackson’s lifetime. After Jackson’s birthday celebration, the beer may be purchased at Black Abbey’s taproom, The Pharmacy Burger Parlor & Beer Garden in Nashville, Homegrown Taproom & Kitchen in Donelson and other bars and restaurants in the Nashville area. A portion of the proceeds of the sale of Hermitage Farmhouse Ale will be donated to support preservation efforts at The Hermitage.

“History inspired the creation of the Black Abbey brand, and Nashville is privileged to have a historic presidential home right here in our backyard,” said Carl Meier, founder of The Black Abbey Brewing Company. “We’re thrilled to bring back this beer for the third time—we received great feedback when it was first released in 2013 and again in 2018.”

In addition to the beer tasting, the March 15th birthday celebration at The Hermitage will feature a presidential wreath laying ceremony at Jackson’s tomb at noon by the Tennessee National Guard, followed by complimentary birthday cupcakes behind the Hermitage Mansion. The Sons of the American Revolution will also be on-site for a bench dedication in the Hermitage Garden at 2 p.m. A full schedule of activities taking place at the event may be found here.