Food and Luxury at The Hermitage

Food is such an integral part of the holiday season so naturally we are curious about that aspect of the Jackson family’s life.  Unfortunately, no one carefully recorded menus and recipes of typical Jackson family meals at this or any other season. To learn about the Jackson family eating habits we have to be detectives.  Receipts, family cookbooks, and objects in the collection all provide clues about food, dining, and entertaining at The Hermitage.

Wealthy families like the Jacksons could supplement the farm grown food with luxuries purchased in Nashville or shipped in from New Orleans. The few receipts that document food purchases provide tantalizing hints at the quantity of luxuries that made their way to The Hermitage. 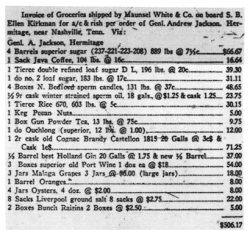 This large and very expensive order of goods came from Jackson’s agent in New Orleans, Maunsel White in February 1838. In the early days of Tennessee, the ability to purchase and store a quantity of expensive imported sugar was a sign of wealth and the value of the commodity required that householders kept it under lock and key.  The sugar chest was a furniture style that grew out of this combined need to display wealth and store the valuable goods securely.  They began to go out of style by the 1820s when sugar became more available. 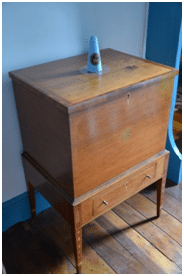 Sugar Chest Davidson County, Tennessee About 1800-1810 A reproduction cone of sugar sits on the chest.

Hostesses frequently served molded jellies for parties as much as a decorative device as an edible. Cooks colored the jellies with such things as beets and jelled them with isinglass [a fish product] or calves feet jelly. Despite these unpleasant sounding ingredients, they were very similar to Jell-O. 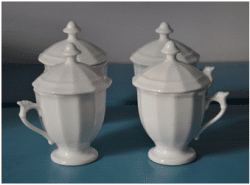 Pot de crème France c 1830 Individual servings of creams or custards were served in small covered cups that were frequently presented in large groups on special plates or stands. 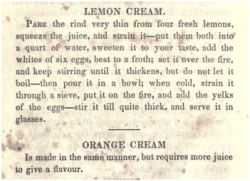 Recipes for Lemon and Orange Cream from The Virginia Housewife by Mary Randolph. This is one of the cookbooks in the Jackson family library. Randolph was reputed to be the best cook in Virginia. After a fall in family fortunes, she opened a boarding house and wrote this cookbook, the first cookbook truly to reflect American tastes and food supplies. Eight cookbooks remain in the Jackson family library as well as books on making wine and distilling whiskey.

Most recipes involved grinding up sugar, spices, and other ingredients.  The two recipes below are for Jumbals, small cakes that would be served in a cake basket and wafers that would have been served with the pot-de-crème. 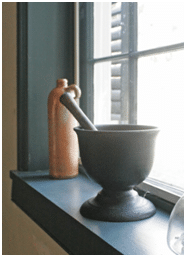 Crème, custard, or jellies were accompanied by wafers, delicate sweet crisps that were served flat or rolled around a spoon handle while still warm and flexible to make a cone.

BEAT six eggs, add a pint of flour, two ounces of melted butter, with as much milk as will make a thin batter—put in pounded loaf sugar to your taste, pour it in the wafer irons, bake them quickly without browning, and roll them while hot.

Put one pound of nice sugar into two pounds of flour; add pounded spice of any kind, and pass them through a sieve; beat four eggs, pour them on with three quarters of a pound of melted butter, knead all well together, and bake them. 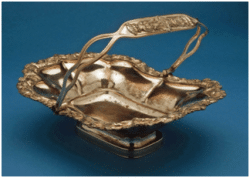 Cake basket England c1820 The kinds of cakes served in a cake basket were actually more like what we would call cookies or teacakes. For special occasions, cakes and sweets came from the bakery in town.

The Jacksons frequently purchased tea imported from China.  The Maunsel White receipt above lists green tea (gunpowder) and Oolong  (Ouchlong).  The Jacksons also purchased Java coffee, grown in the present country of Indonesia, once the world’s largest coffee producer.  Tea was not just a beverage, but also an important social occasion.  “To tell you of this city [Washington], I would not do justice to the subject.  The extravagance is in dressing and running to parties….Two dinings; several times to drink tea…”  (Rachel Donelson Jackson to Eliza Kingsley, 1824.) 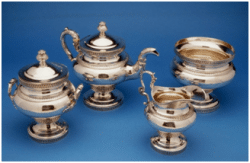 Andrew Jackson purchased this service from Louis Veron of Philadelphia while he was president. The original invoice listed a coffee pot, in addition to the teapot shown here. In later years the set was split among several owners and the coffee pot has never been located.

None of this information is especially tied to celebrating Christmas, but it does show that the Jacksons and their guests enjoyed a variety of treats and imported luxuries all year round.