Jackson Resigns as Governor of Florida Territory | Notes from the Curator

Andrew Jackson spent his last two months in Florida in a determined effort to make former Spanish Governor Jose Callava bend to his will one last time. They became involved in a massive dispute over papers proving the inheritance of a woman named Mercedes Vidal. These documents should have been part of the Spanish Archives turned over to the United States. Jackson sent men to Callava’s house to retrieve the papers. They were unsuccessful, resulting in Jackson resorting to throwing Callava in jail, a severe breach of diplomatic etiquette. Rachel Jackson reported to her brother John Donelson: “the governer [Callava] has been put in the Callibous wich is a turrible thing realy I was afraide ther  would be a rebellion.”* Interference from one of President Monroe’s Florida appointees, a judge named Eligius Fromentin only made the situation worse. This was the last straw for Jackson. He felt he had completed his mission of setting up the government in Florida, and he wanted to go home to Tennessee before cold weather set in.

On August 26, 1821, Andrew Jackson Junior had been sent back to Tennessee under the supervision of Robert Butler. We don’t know why the elder Jacksons sent Andrew Junior home a month ahead of their departure. Perhaps it was to begin the school term. Col. Butler reported to Jackson that they had arrived in Nashville on September 8 and admitted rather sheepishly that the speed of their journey had probably been hard on the horses but that they seemed to be recuperating. Thirteen days was fast for the trip of more than 400 miles. Until the Jacksons arrived home, Andrew Junior was to be under the general supervision of Rachel’s brother John Donelson, who lived very near The Hermitage. 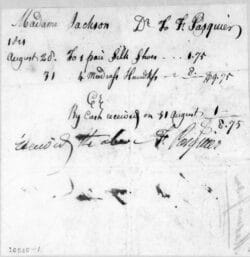 The only recorded purchase made in Pensacola by either of the Jacksons were the items on this receipt: a pair of silk shoes and four madras handkerchiefs. Madras handkerchiefs were 36-inch square brightly colored cloths frequently used as head coverings by enslaved women.

Jackson cited Rachel’s health as a reason to leave Florida, but his health was probably worse than hers. She told brother John: “…it has almost taken His life…I knew it would be a ruining Concerne, I shall not pretend to Disscribe the toile fatigue & trouble… “*(Rachel Jackson to John Donelson, August 25, 1821). 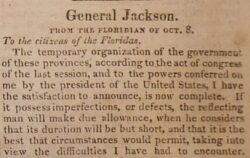 Andrew Jackson’s farewell to the citizens of Florida

On October 4, the citizens of Pensacola held a farewell dinner for Jackson, and on October 8, Jackson, Rachel, Narcissa Hays and the rest of their party left Pensacola. They made the entire trip back to The Hermitage by carriage, stopping along the way with various friends and acquaintances in Alabama. They wrote few letters on their trip, so it is not possible to trace their exact route. However, they likely spent some days with James Jackson at Forks of the Cypress and John Coffee, also near Florence, Alabama. 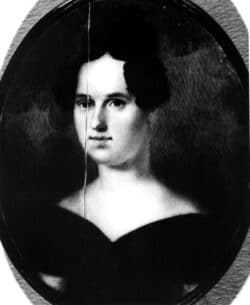 On the road to Nashville, they met up with Mary Leticia Kirkman and her uncles en route to New Orleans via Natchez. James Jackson of Forks of the Cypress was another uncle. More importantly, Jackson’s friend and military aide Richard Keith Call was in love with Mary Kirkman, but Mary’s parents, Nashville residents Thomas and Ellen Kirkman did not like Andrew Jackson and opposed the relationship. After arriving in Nashville, Jackson took the opportunity to offer Call some courtship advice: “…the conduct of her mother to her as stated, has been of the most cruel kind – and if your and her ultimate object is to marry – the sooner the better—you have friends who will aid you, in this number include me…” 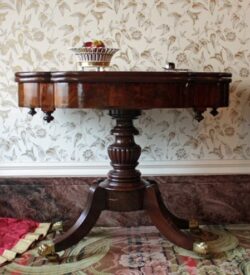 This is likely one of the pair of card tables purchased from Francois Seignouret in New Orleans for $90 and taken to Pensacola. The furniture finally arrived in Nashville in January 1822.

In the same letter, Jackson also tasked Call with the job of arranging for shipping of the Jackson’s furniture from Pensacola. “Mrs. Jackson begs me to remind you of our furniture, to have it forwarded to orleans [sic] as soon as possible with instructions to Capt. [James] Scallen to have it forwarded to Nashville by the first Steam Boat –” (Andrew Jackson to Richard Keith Call November 15, 1821). It had taken them 28 days to make the trip to Nashville, arriving on November 4, compared to the 13 spent on the road by Robert Butler and Andrew Jackson Junior. Andrew Jackson sent his official resignation to President Monroe by James Bronaugh on November 13. He was prepared, as he told Call, to spend the rest of his life at The Hermitage.

*No edits have been made to the original spellings in quotes.