July 1821 – The U.S. Receives Florida from Spain with Andrew Jackson at the Helm | Notes from the Curator

July 1821—The delays in carrying out the transfer of Florida from Spain to the United States have nearly driven Andrew Jackson mad. Finally, it seems that the transfer will happen, despite delays, accidents with ships transporting the Spanish officials and the obstreperous behavior of Spanish Governor Jose Cavalla. Jackson and the American troops have moved close to Pensacola at Galvez Springs. Rachel Jackson, Narcissa Hays and Andrew Jackson Jr. have taken up residence in Pensacola. The last details are being ironed out – despite the fact Andrew Jackson doesn’t speak Spanish and Governor Cavalla does not speak English. 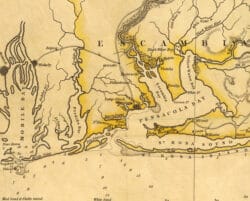 This map of the Pensacola Bay area shows most of the locations related to the Jacksons’ journey to Pensacola: Mobile and Blakely, Alabama; the home site of Manuel Gonzales; Bayou Chico (the site of Galvez Springs); and the city of Pensacola.

All was not quiet while waiting. While awaiting the transfer, the Jacksons run up some amazing bills for provisions, including vast amounts of alcohol. Although they are obviously feeding more than just the members of the family, Jackson is later criticized for spending thousands over and above his pay for expenses. The steward Ephraim Blane is paid $1 a day.

In 1828, when Andrew Jackson was running for president, newspapers carried articles complaining about his excessive expenses during his term as Florida Governor.

The enslaved servants that have accompanied the Jacksons receive little mention in the accounts of the Jacksons’ time in Florida; however at the beginning of July, Betty got into trouble for some misdeed, possibly taking in other people’s laundry, and Jackson ordered her to be whipped, saying that if the steward can’t keep her under control – get a new steward. 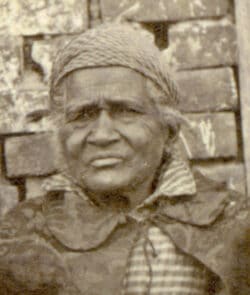 This picture of Betty was taken about 1867, 40+ years after she got in trouble in Florida.

Finally on July 17, the occasion for which they have all been waiting arrives. Rachel Jackson described the day to her friend Eliza Kingsley:

At length, last Tuesday was the day. At seven o’clock, at the precise moment, they hove in view under the American flag and a full band of music. The whole town was in motion. Never did I ever see so many pale faces. I am living on Main street, which gave me an opportunity of seeing a great deal from the upper galleries. They marched by to the government house, where the two Generals met in the manner prescribed, then his Catholic majesty’s flag was lowered, and the American hoisted high in air, not less than one hundred feet.

Pensacola 1827. The transfer ceremony took place in the Public Square.

Rachel went on to describe the distress and nervousness of the people of Pensacola as they don’t know what the future looks like. (Actually, the distressed residents were the remaining Spanish inhabitants who were beginning to be outnumbered by Americans – described by one author as brigands, camp followers, speculators, gamblers and soldiers-of-fortune – pouring into Pensacola.) They didn’t have to wait long. Jackson immediately began making proclamations covering everything from government organization and health policies to regulating behavior on the Sabbath. Sundays formerly were a day of festivities for the residents of Pensacola – now they were to be staid Protestant days of worship. Many authors tried to blame Rachel for this particular order, given how many times she complained in letters about behavior on the Sabbath; however, it seems likely that Jackson agreed with her.

Jackson’s frustrations did not end with the transfer. He got into disagreements with former Spanish Governor Jose Cavalla who did not leave Pensacola with the rest of the Spanish officials. Those Americans who had been in Pensacola since before the transfer process began continued to socialize with Cavalla, which struck Jackson as extremely inappropriate. One of Jackson’s motivations for taking the position of Territorial Governor was to get appointments for his friends and colleagues to allow them to take advantage of land speculation and business growth opportunities. However, Jackson had not been able to appoint most of the subordinate officials, as President James Monroe made the major appointments without consulting Jackson. Once these new American officials finally arrived – they were not in Pensacola by the time of the transfer – Jackson had disagreements with them as well.

In August a newspaper, The Floridian, is established in Pensacola. Its first issue on August 18 is nearly filled with Jackson’s proclamations, but by the next issue, it carried many advertisements, including some from Jackson’s associates taking on civilian work in addition to their public or military duties. 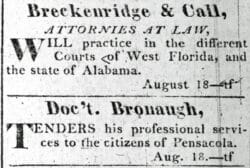 At least Andrew Jackson was finally in Pensacola and with Rachel in the house rented from Desiderio Lurria. The furniture bought for them in New Orleans had arrived. In addition, this fine card table also graced their residence in Pensacola. It originally came from George Crowninshield’s yacht “Cleopatra’s Barge” out of Salem, Massachusetts. In 1817, the furnishings were sold at auction in New Orleans, and a pair of card tables eventually made their way to Jackson’s residence in Pensacola. After the Jacksons left Pensacola, the tables passed through several other owners. 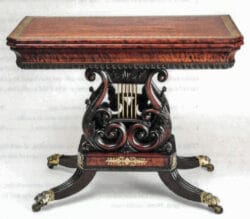 The table came to The Hermitage from a descendent of one of its later owners. It is currently on loan to the Peabody Essex Museum in Salem, Massachusetts, where it has been re‐united with other furnishings from “Cleopatra’s Barge.”

At the end of August, Rachel Jackson reported melancholy news to her brother John regarding their nephew Stockley Donelson Hutchings. Hutchings, the uncle of Jackson’s ward A. J. Hutchings, a former postmaster of Huntsville Alabama, had come to Pensacola with Andrew and Rachel Jackson. A few days later, Andrew Jackson wrote to John Donelson that he was ready to return to Tennessee: “I am determined to resign my office the moment congress meets, and live near you the balance of my life.”  As we know, that did not happen, but it is evidence of Jackson’s great frustration with the Florida position.