As with all growing things, The Hermitage garden never stands still.

Early visitors to The Hermitage and Jackson’s letters note Rachel’s fondness and special interest for the garden.

This one-acre garden adjacent to the Hermitage and designed in the 19th century was a favorite spot of both Andrew and Rachel Jackson. Today, its beauty has only continued to blossom.

Plan your visit to the garden

Some of the flora, including several trees and flowering bulbs, were planted in Jackson’s time or are direct descendants of the originals. Old roses, peonies, iris, crape myrtles and other varieties of plants filled the garden then and still do today. In fact, if Andrew and Rachel Jackson were to walk the garden today they might feel right at home.

Something is in bloom nearly year round in the garden. In February, long before the last snow or frost, daffodils, crocuses and tulips begin their colorful dance. Fragrant hyacinths and more tulips appear in March, followed by grape hyacinths, fruit trees and flowing shrubs in full array. April brings the dogwood and iris and a full orchestra of white and pink peonies trails in May. Annuals, perennials and heirloom roses take over the summer months, some lasting long past December’s frost and snow. By January, in the rear of the garden’s center beds, the tiny, yellow, clove-fragrant blossoms of a winter honeysuckle bush bloom.

In 1819, the Hermitage mansion was underway and the Jacksons needed a new garden. At the recommendation of a friend, Andrew Jackson hired the English gardener, William Frost, to plan it.

The garden was designed as a typical, foursquare English garden, common in Europe since the Middle Ages, consisting of four quadrants and circular center beds. These were planted with flowers, herbs, shrubs, vines, vegetables, berries and fruit trees. Though very few early descriptions of the garden at The Hermitage exist, it is known that Rachel purchased flowering plants including geraniums, daisies, wallflowers and polyanthus from Cincinnati to add to the garden in 1825.

When Rachel Jackson died in 1828, Andrew had her buried in the garden. Originally, a small grave house covered her burial place but in 1831, architect David Morrison designed a tomb modeled after a Grecian monument to replace it. Later Andrew Jackson was buried beneath the tomb. Other family members were buried in an adjoining plot.

The garden may have been redesigned several times. In 1988, archaeologists noted two brick edged beds under the library wing of the mansion. These may have been flowerbeds, covered when the house was enlarged in 1831.

In 1849, after Andrew Jackson’s death, Andrew Jackson Jr. and his wife Sarah made several improvements to the garden including fencing and brick edging around the beds. At that time, small fruits, such as raspberries and strawberries, were noted in the garden in addition to flowers and shrubs.

When Andrew Jackson Jr.’s financial situation became difficult in the late 1850s, the garden declined. By the time the Ladies’ Hermitage Association was formed in 1889, the beds were weedy, fences broken and shrubs and trees were dead or dying. The LHA devoted great effort to the rejuvenation of the garden by interviewing people who had visited The Hermitage in early years to learn about plants. They relied on Andrew Jackson’s granddaughter Rachel Jackson Lawrence as a source.

The Hermitage garden continues to flourish today with something in bloom nearly year round. Access to the garden is available in our tour packages, so come walk through the beautiful sights and smells as Rachel and Andrew once did. 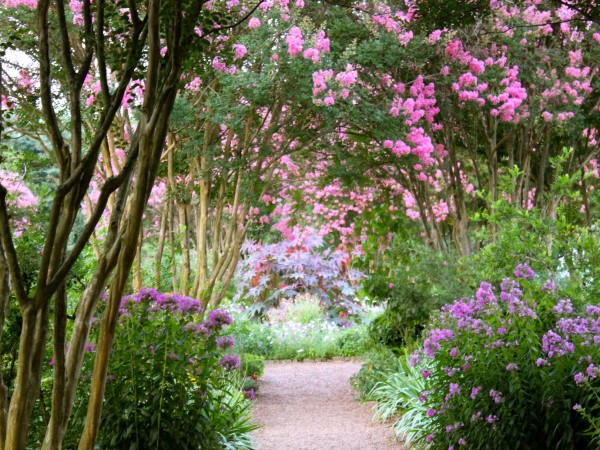