Today, there are three slave cabins still standing at The Hermitage–Alfred’s Cabin in the backyard of the mansion and the First Hermitage farmhouse and kitchen. Historical documents reveal little about slave houses at The Hermitage.

However, Hermitage archaeologists have located 13 slave dwellings in three different areas of the property: the work yard north of the mansion–used mostly for house slaves, the Field Quarter and First Hermitage areas–used for skilled and field slaves.

Most of the slave dwellings on the property were very similar, two-room structures with two 20-foot square, single-story rooms. They featured a small loft (most likely for children to sleep), one door, one window and a fireplace.

Excavations of all of these very standardized dwellings have uncovered root cellars, which would have been underneath the floorboards and accessed by a hatch door. What makes these root cellars unique are the variability of their location, size and construction among the cabins. This indicates that the slaves, not the Jacksons, built them.

In the work yard behind the mansion, only Alfred’s Cabin remains. It is a log, double pen cabin organized around a central chimney. This house form is commonly known as a saddlebag. Recent studies suggest it may have been built as early as 1841. It is called Alfred’s Cabin because Alfred Jackson, formerly enslaved, lived in it as a free man until his death in 1901.

Hermitage archaeologists conducted extensive testing and excavation around the cabin. Along with a wide variety of artifacts, historic fence lines were found. This information provides clues about the backyard’s divisions between the private and public space.

The Life of Alfred Jackson

Alfred lived at The Hermitage longer than any other person, white or black. As part of the enslaved community, the 1,000-acre, self-sustaining plantation relied completely on the labor of enslaved African American men, women and children. Today we share part of his life and story.

Learn More About His Life

The largest of the slave dwellings in the work yard was a three-unit brick structure that Hermitage archaeologists have called the “Triplex.” It likely housed three slave families. Unfortunately, the Triplex was destroyed in a tornado in the late 1860s. Only its foundation remains.

Artifacts collected from the interior of these units include animal bone, ceramics, glass and children’s marbles. More than 30,000 animal bones recovered from this location signify that the area was used as a refuse pile after the Triplex was destroyed. An especially interesting find was a large quantity of sewing-related artifacts, such as needle cases, thimbles, carved bone-lacing rods, straight pins and dozens of buttons.

Archaeologists also located two other slave dwellings in the work yard near Alfred’s Cabin, but little is known about them.

In the Field Quarter stood four, nearly identical brick duplexes. Each building had chimneys at both ends. All that remains of these buildings are the foundations that have been unearthed by archaeologists.

The four buildings formed a square with a central ‘courtyard area.’ These brick buildings were most likely built around 1821, once the brick Hermitage mansion was finished. At least one earlier log dwelling was also located in this area.

The archaeological findings at the Field Quarter have revealed significant information about slave life at The Hermitage. Many activities took place in the Field Quarter yard areas outside, rather than inside the cramped quarters.

Archaeologists found brick paving or flooring outside the doorway of one cabin and excavated a fence line (postholes) alongside another cabin.

Artifacts in and around these buildings have revealed a great deal of information about the Field Quarter slaves’ lives and culture.

Once Jackson and his family moved into the completed mansion, he converted his original log farmhouse into slave quarters, which included a kitchen and farmhouse.

The First Hermitage buildings have been restored to reveal the living and working quarters for many of the slaves.

Learn more about the enslaved community that lived at the Hermitage on the “In Their Footsteps” tour and horse-drawn wagon tour.

In Their Footsteps: Lives of the Hermitage Enslaved Tour

The “In Their Footsteps” walking tour highlights the lives of the enslaved men, women and children who worked within the mansion during the life of Andrew Jackson and their stories beyond Jackson’s death and emancipation.

The Hermitage Enslaved: A Wagon Tour

The Hermitage Enslaved: A Wagon Tour takes visitors beyond the Hermitage mansion and into the plantation fields where the majority of the enslaved men, women and children worked and lived under the ownership of Andrew Jackson. 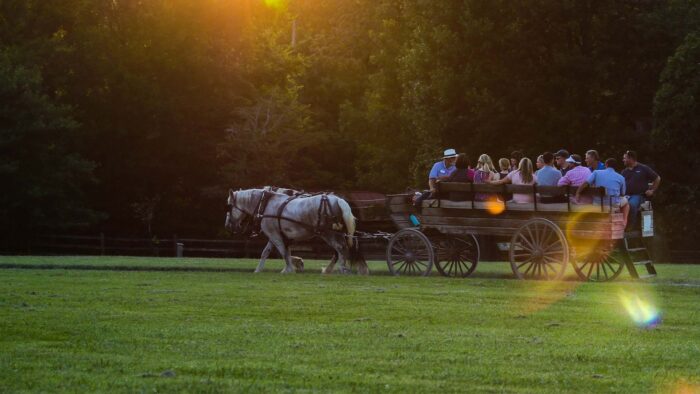 Learn more about the enslaved families at The Hermitage.