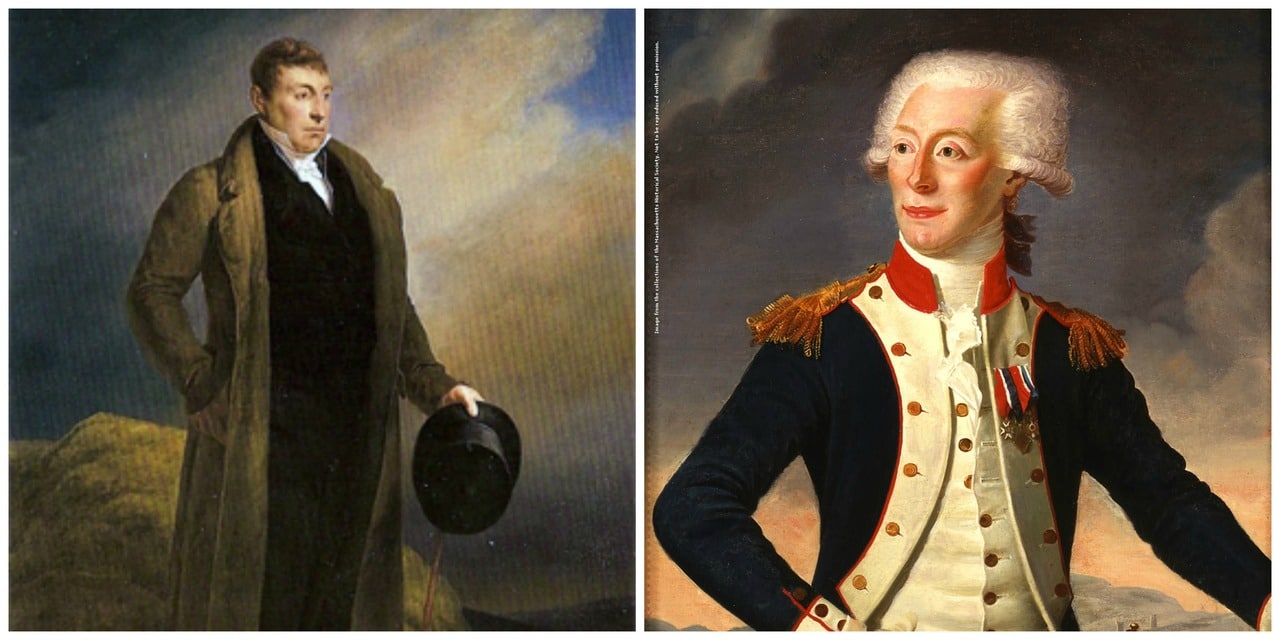 One hundred and ninety years ago this month, Andrew Jackson entertained the most famous guest to visit The Hermitage during his lifetime.  In 1824-25, Revolutionary War hero, the Marquis de Lafayette (1757-1834) made an extensive tour of the United States as the nation’s honored guest.   On May 5, 1825, during his two day visit to Nashville, Lafayette came by steam boat to The Hermitage to visit Jackson.

Lafayette’s appearance had changed since the dashing 23 year old French officer came to the aid of the Americans during the Revolution. Rachel Jackson described the older Lafayette as wearing a wig and a little inclined to corpulence. Nevertheless, she was delighted with him, declaring “…he is an extraordinary man. He has a happy talent of knowing those he has once seen.” (RJ to Eliza Kingsley 23 Dec 1824)

The two men had met in late 1824 in Washington while the Jacksons were in the city for the Congressional session.  Jackson had looked forward to meeting Lafayette and had written a letter of welcome in September 1824. Lafayette’s response indicated he was as excited as Jackson was at the prospect of a meeting.   Rachel Jackson described the accidental first encounter at Gadsby’s Tavern where all were staying, in a letter to her friend Eliza Kingsley:  “…they met on the entry of the stairs.  It was truly interesting.  The emotion of revolutionary feeling was aroused in them both.”

Lafayette and his party arrived in Nashville on Wednesday morning, May 4, 1825 at 8:00 a.m.   Thousands of Nashvillians waited to greet him.  There was a procession to the public square, where forty Revolutionary War veterans from all over Tennessee waited to greet Lafayette.  That evening, the citizens of Nashville gave a large public dinner with over 200 guests that was presided over by Andrew Jackson.  After dinner, Jackson and Lafayette, both Masons, attended an even larger reception at the Masonic Lodge.   The next morning, Lafayette and his party visited a militia encampment as well as the Nashville Female Academy and Cumberland College. 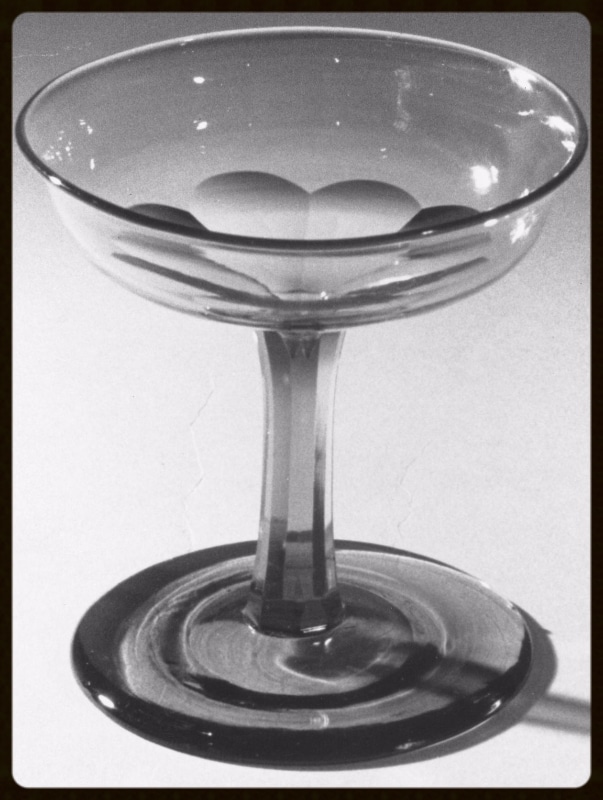 There is a tradition that Nashvillians toasted Lafayette with hock (a German white wine) served in a set of green glasses at one of the events in Nashville. These glasses descended in Nashville families as a treasured souvenir of the visit. The Hermitage has two glasses. Mrs. J.T. Granbery presented the first in 1959 and Rachel McAllister and her sister, Caroline Merritt, presented the second glass last fall.

After lunch, the party made its way by steamboat to The Hermitage for a dinner attended by the dignitaries as well as the ladies and gentlemen of the neighborhood who had been invited by Rachel Jackson.   Lafayette’s secretary, Auguste LeVasseur, observed, “The first thing that struck upon arriving at the general’s was the simplicity of his house.  …I asked myself if this could really be the dwelling of the most popular man in the United States, of him whom the country proclaimed one of her most illustrious defenders…” (LeVasseur Lafayette in America p. 156)

Jackson showed the visitors around The Hermitage which they admired very much.  After the tour, they entered the house where his friends urged Jackson to show the swords and other items presented in honor of the victory at New Orleans.  He handed a pair of pistols to Lafayette and asked if he recognized them.  After studying them, Lafayette said they were a pair he had presented to George Washington in 1778 and it was “a real satisfaction in finding them in the hands of one so worthy of possessing them.  At these words the face of Old Hickory was covered with a modest blush, and his eye sparkled…”  (LeVasseur p 157) 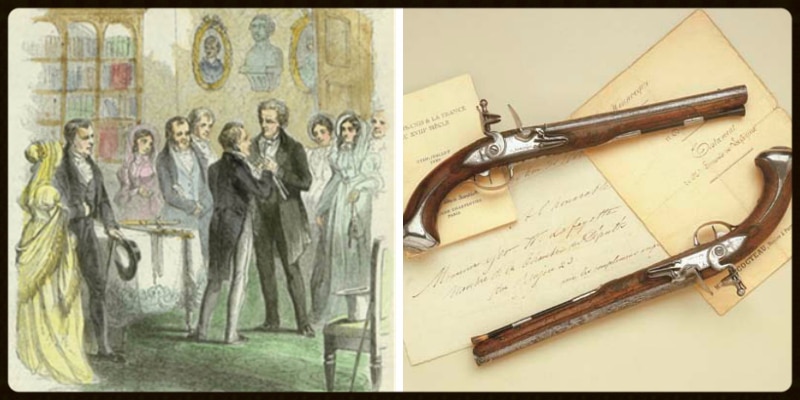 This illustration from Harper’s Magazine depicts Jackson and Lafayette embracing after Lafayette sees the pistols. A Washington relative had given the pistols to Jackson just the year before. In Jackson’s will he bequeathed them back to Lafayette’s son. They now belong to Fort Ligonier near Pittsburgh.

After the dinner at The Hermitage, the group returned to Nashville for a grand ball.  After two full days of ceremonies and festivities, Lafayette and his party boarded a steamboat for the trip to their next stop, Louisville.  The Hermitage was one of the few private homes where Lafayette was entertained on his journey and although Andrew Jackson was thrilled with the honor, he was tired after the disappointments of the lost election, the travel to and from Washington, and his busy schedule after returning.  He wrote his friend, Richard Keith Call the day after Lafayette departed Nashville: “I am now in dry dock for repairs.” (May 7, 1825)

On the other hand, the 67-year-old Lafayette and his entourage kept an exhausting schedule travelling through much of the United States but never seeming to slow down.  A near tragedy occurred when their steamboat sank as they neared Louisville.  No one was killed but Lafayette lost some of his property and money.   They continued their tour until September 1825 when they departed for France. 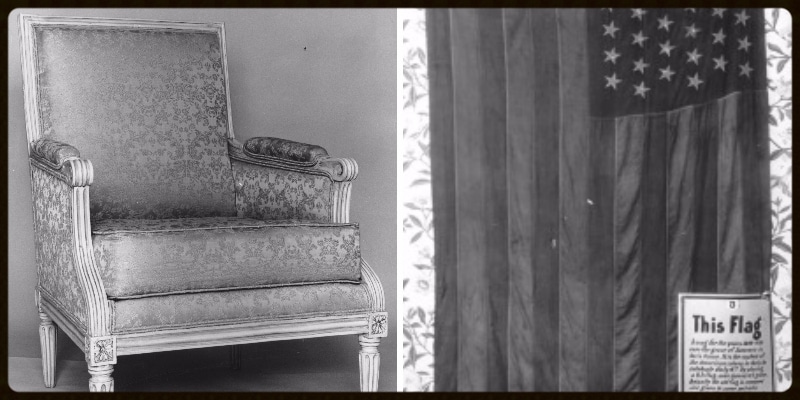 If you would like to read more about the Marquis de Lafayette’s visit to Nashville and The Hermitage, former LHA Regent Ann Harwell Wells wrote an article for the Tennessee Historical Quarterly   “Lafayette in  Nashville, 1825”  [Vol. 34, No. 1 (SPRING 1975), pp. 19-31]

Alan R. Hoffman’s translation of Lafayette’s Secretary,  Auguste LeVasseur’s journal of the trip, Lafayette in American in 1824 and 1825 gives an eye-witness account of the entire year long visit.

Painting with the President