Moving into the Hermitage Mansion | Notes from the Curator

Moving into the Hermitage Mansion, November 1821

Andrew and Rachel Jackson, along with Narcissa Hays and their enslaved servants, returned to Tennessee from Florida during the first week of November 1821. They had traveled by carriage, taking a circuitous route through Alabama. Their last Alabama stop had been Huntsville, and their first Nashville-area stop was at Judge John Overton’s home near Franklin Road. They must have stopped briefly in downtown Nashville because the Jacksons placed an order with cabinet maker Richard Smith on November 5th for a square dining table, a pair of card tables and a pair of washstands.

Jackson reported to George Walton, acting governor of Florida, that “we arrived home on the evening of the 5th the ladies in good health, and all the Gentlemen and servants except Mrs. J. maid taken on the journey & who is still ill” (Jackson to George Walton, November 13, 1821). Also on the 5th, a committee of Jackson’s friends tendered an invitation to a public dinner and a ball to be held on a date to suit Jackson. One would think that Jackson might like a breather before beginning social activities, but the date for the dinner and ball was set for the following Friday evening, November 9th, 1821. 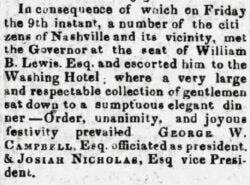 “The day closed with a splendid Ball, where the Fair of Tennessee shown with unusual brilliancy and grace.”

When did the Jacksons move into their new house? It used to be assumed that since the house was started in 1819, it was completed soon after. Further research into the bills for construction suggests that the earliest they could have occupied the house was the spring of 1821, just before leaving for Florida. However, the plasterer submitted his bill just a few days before they left, which suggests that plastering was not complete until about that time. Of course, the Jacksons could not occupy the house until the plastering was finished. Even so, the plaster would need to cure before the painting was done. Some of the painting and papering was done as late as 1824. 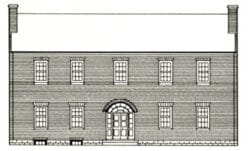 This drawing of the Federal-style 1819-1821 Hermitage mansion omits the shutters that almost certainly would have hung at each window. The primary decorative feature of the exterior was a fanlight window over the front door.

Even if they had started the process of moving into the new house in the spring, they could not have settled in until they returned from Andrew Jackson’s term as territorial governor of Florida in November 1821. There are no mentions of moving, descriptions of the new house or visitor comments about the house during the period from 1821 to 1822. An anonymous traveler saw the house in mid-April 1823 and published a description of it in July 1829. It was described as “large, but very plain – the furniture what in America is termed ‘elegant’ and in Great Britain ‘decent.’” Unitarian minister, Horace Holley, President of Transylvania University in Lexington, Kentucky said in August 1823, “He has built him a good brick house within the last two years and [he] has finished it handsomely.” (Horace Holley to Luther Holley, August 14, 1823)  So, despite the Jackson reticence, it seems likely that they began to settle into their new home just after returning from Florida. 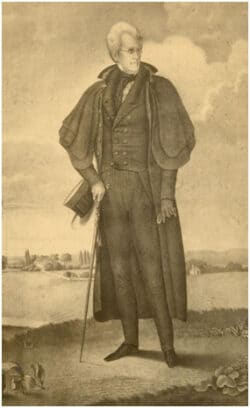 Ralph E.W. Earl included an image of the Federal-style Hermitage in this print based on a portrait of Andrew Jackson. Although the print was published in 1830, the new front porch is not included. (See detail below) 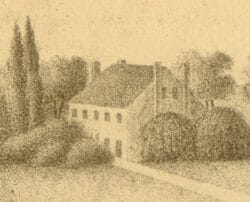 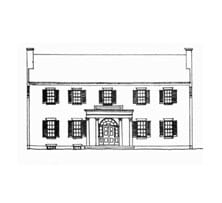 Later in the 1820s, a small columned porch was added. 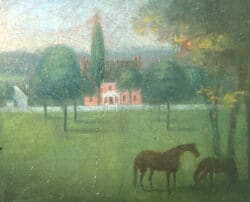 Detail from The Tennessee Gentleman shows the 1821 house, with porch, in the background. 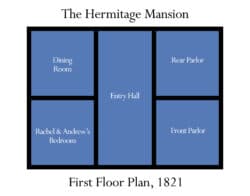 The floor plan featured four identically sized rooms on each floor separated by a wide central hall. All rooms opened directly onto the central hall. The staircase was two straight runs connected by a landing instead of today’s more elegant elliptical staircase added after the fire of 1834. 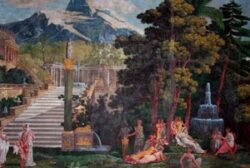 Juliana Conner, an 1827 visitor, described the “walls covered with a very splendid French paper, beautiful scenery, figures. . .” in her diary. 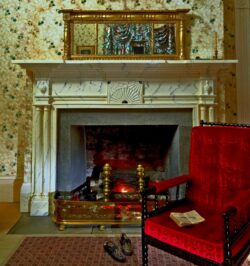 Mrs. Conner also noted the front parlor contained “offerings which had been presented him from every part of the Union…” Jackson’s bedroom, which would have been the front parlor in 1821, still retains the 1821 mantle which survived the fire of 1834. The furniture ordered on November 5th was paid for in December, and in January 1822, the furniture purchased in New Orleans finally arrived from its temporary home in Pensacola. Once all these furnishings were in place, the brick mansion must have finally felt like home.

Despite Jackson’s stated intention to retire to The Hermitage after his time as Governor of Florida, he soon was travelling. He spent the winter of 1823-24 in Washington serving as Senator from Tennessee. Rachel stayed at The Hermitage that winter, but the next winter she went to Washington with Jackson for the session of Congress. They were in Washington for the vote in the House of Representatives to decide the 1824 Presidential election, which Jackson lost. They traveled again to New Orleans for the anniversary of the Battle of New Orleans in January 1828.

This was the only version of the Hermitage mansion that Rachel ever knew, and it was undoubtedly the finest house she had ever occupied.

*This edition of Notes from the Curator is the last from Marsha Mullin, who retired in October 2021 after a 35-year career with Andrew Jackson’s Hermitage. Routinely leaned on for her knowledge of all things Hermitage- and Jackson-related, she has had a lasting impression on the organization and will certainly be missed. Join us in wishing this stalwart of our team well in her next chapter. We will miss you, Marsha!