On July 14, 2018, I attended the Back to Angola Festival, an event to commemorate the lives of the formerly enslaved persons escaping slavery in the United States and given asylum in the Spanish territory of Florida. In a small park near the river, the descendants of the Angola community gathered to celebrate the legacy of their once thriving community. Many of these descendants traveled from the Bahamas, bringing traditional foods, music and art to share with their Floridian family. 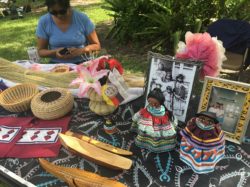 As a native of South Carolina, I was immediately drawn to the basket weavers sewing intricate designs with sweetgrass. The weaver was a member of the local Seminole tribe who held close connections with Black Seminole tribes in the area. It immediately became clear that the cultural makeup of Florida was much more complex and diverse than what historians described in existing narratives. The festival and its attendees were visual representations of a rich, prosperous settlement of diverse people in early 19th-century Florida.

The Angola site was identified within the Manatee Mineral Spring Park in Bradenton, just southwest of Gainesville, during an archaeological study led by Dr. Uzi Baram, Professor of Anthropology of New College. In “‘Looking for Angola’: An Archaeological and Ethnohistorical Search for a Nineteenth Century Florida Maroon Community and its Caribbean Connections,” historian Dr. Canter Brown of Fort Valley State University suggests that the term “Angola” was chosen as the name for the area as many of the occupants were runaways from South Carolina with West African heritage. Situated along the river banks of the Suwanee River, the community was a safe haven for free Blacks and Seminole tribes, including members of Black Seminole groups, as it provided protection from invaders as well as a prime location for trading with allies.

After United States allies destroyed a nearby fort occupied by Black soldiers in 1818, the U.S. military, under the command of General Jackson, procured land and dissolved Angola of approximately 900 runaway slaves, Seminoles and Black Seminoles. Those who survived the raid escaped to the southern-most tip of Florida, and others fled to the Bahamas and reestablished communities in the capital of Nassau. Nearly 300 of the Black settlers were captured and returned to their former owners in the United States.

For years, The Hermitage has worked to uncover pieces of the Angola history but primarily within the borders of Tennessee. Based on bills of sale found in the Papers of Andrew Jackson (located at the University of Tennessee, Knoxville), we are aware that Jackson captured several runaway slaves during his military tour of Florida and arranged to compensate their original owners. One of those captured in 1818 was Fernando, later known on The Hermitage site as Polydore. In a letter written in 1822, Polydore’s previous owner, Catalina Mir Satorios, expresses frustration with him for running away and hopes he will conduct himself “in a more favorable manner with his new owner,” Andrew Jackson. Dr. Jane Landers, Vanderbilt professor and author of Atlantic Creoles in the Age of Revolutions (2010), discovered during her research of early Florida settlements that Polydore spoke at least seven languages, including Spanish, when he arrived at The Hermitage. 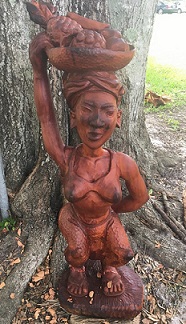 As a representative of The Hermitage, my goal was to begin a dialogue with researchers and community members who are documenting the people and the land associated with the free town of Angola. The guides during my visit were Vickie Oldham, founder of the “Looking for Angola” Project; Trudy Williams, co-founder of the non-profit group “Reflections of Manatee;” and Daphney Towns, the organizer of the Back to Angola Festival. During my two-day visit, these amazing women shared both their successes and failures to document the history of this once thriving community. I spent most of my visit listening to Bahamian music, meeting local artists and enjoying family stories with Angola descendants over Bahamian fried conch fish and Jonnycakes. As one story ended and the next began, I could feel an overwhelming sense of pride as they shared memories of the resilience of their ancestors. Moments such as this one are poignant reminders that the role of an historian is to listen and observe twice as much as you write or speak. For we are not the authors of history but merely the stewardship of its legacy.

We are continuing our work with the Bradenton community as they continue to uncover the history of the Angola community in hopes of connecting The Hermitage to other narratives of antebellum history in the United States. 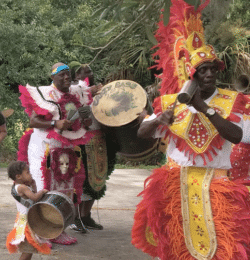 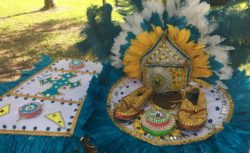