In 2006, archaeologists discovered a slave cemetery at the site of a former plantation near The Hermitage during a development project. The men, women and children buried in this cemetery ranged in age from 1 to more than 45 years old. Buried in family groups, their bones spoke to the hardship of their lives and the cruelty of slavery. These individuals suffered from disease, malnutrition, arthritis and injuries inflicted on them. Although their names are not known, they have dramatically told us their forgotten histories.

An agreement between the state and the developer led to the bodies of 60 individuals being reinterred at The Hermitage in 2009. The Hermitage agreed to be the final resting place because of the slaves’ history with Rachel Jackson’s family. To memorialize these enslaved people, The Hermitage commissioned a memorial that was erected just outside the Hermitage Church. Funded by the Cracker Barrel Foundation, Our Peace, Follow the Drinking Gourd stands as a memorial for these individuals while at the same time providing a place for everyone to reflect upon the continuing legacy of slavery.

Aaron Lee Benson, Professor of Art, Sculpture/Ceramics at Union University in Jackson, Tennessee, designed the memorial. He used Polaris, the North Star, and Ursa Minor, the Little Dipper constellation, as central components to symbolize not only the navigation of the enslaved to freedom but also for us to navigate peace in our own lives and our world. 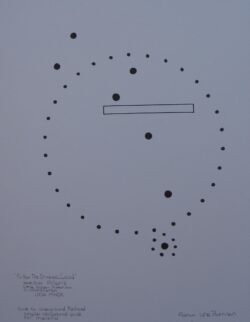 Perhaps no song is more closely associated with the Underground Railroad than “Follow the Drinking Gourd,” which slaves would sing to teach them how to find and follow the North Star, one of the stars in the Little Dipper, to freedom.

Benson’s sculpture consists of seven oak trees in the shape of the Little Dipper constellation, laid out across a circle of 30 boulders. Trees are one element at this historical site that transcends slavery, presidents and human beings. The final resting place of the 60 individuals is marked by a wall of stones.

The circle of stones is symbolic of our unity of commitment to these beliefs. Stone is the one eternal medium that a thousand years from now will still speak clearly what we have decided is worthy of saying.

“This sculpture was not conceived nor built to make a civil, political, cultural or religious statement on slavery. It is proposed as a singular declaration of our greater hopes of a renewing of our faith in one another and a simple but eternal reminder that we are one people, one race. . .the human race,” Benson said.