Andrew Jackson’s Hermitage has partnered with the National Museum of the American Indian (NMAI) to feature President Jackson’s Phillip Creamer pistol in an exhibit in the Smithsonian Institution. The exhibition, Nation to Nation: Treaties Between the United States and American Indian Nations, “focuses on historical episodes of treaty-making and will feature nine original treaties on loan from the National Archives that will rotate throughout the run of the exhibit.” Along with Jackson’s pistol, NMAI included objects from various Native Nations and leaders and prominent American figures, such as Presidents George Washington and Thomas Jefferson.

This loan is significant to The Hermitage as well as NMAI. It represents the power of historical material culture to forge intellectual partnerships to interpret complicated histories. Our curatorial departments have agreed to remain in contact and look for additional opportunities to work together in the future.

Nation to Nation: Treaties Between the United States and American Indian Nations will open through Spring 2020 at the National Museum of the American Indian in Washington, D.C. 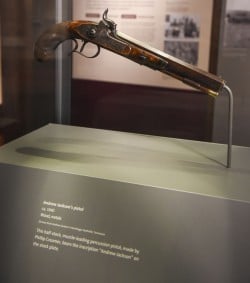