In Memory of Jean Fuller Guy  by Marsha Mullin, Vice-President of Museum Services 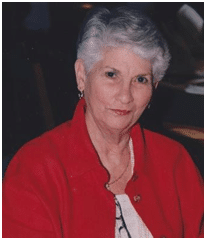 On January 6 2016, Jean Fuller Guy passed away in Humboldt Tennessee.  Mrs. Guy was the great- great-granddaughter of Andrew Jackson’s granddaughter Rachel Jackson Lawrence.  The relationship was closer than the generations would suggest because Rachel Jackson Lawrence raised her grandson, Jean’s grandfather, Charles Lawrence Winn, after his mother died at his birth.  Jean and her parents lived near The Hermitage and near her grandfather when Jean was a child, so she grew up with stories of “Little Rachel” and the rest of the Jackson family.   She attended Andrew Jackson Elementary School. 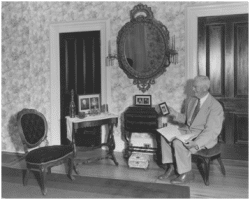 Charles Lawrence Winn inherited several of the Jackson family possessions, which came down in Little Rachel’s family. Over the years, The Hermitage acquired many of these Jackson objects, pamphlets, and documents from Winn, including Jackson’s North Carolina law license. One of the items C. L. Winn owned was Sarah Jackson’s combination sewing/writing table, which sits underneath the mirror in the picture above. Jean Guy eventually inherited this table and has had it on loan to The Hermitage for several years where it can be seen in Sarah and Andrew Jackson Junior’s bedroom. 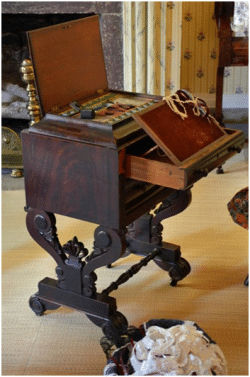 The work table/writing desk shown with the writing stand in position. The top lid is open showing where ink, pens, notebooks, and other accessories would be stored. The notebooks which remain with the sewing table contain Sarah Jackson’s memoranda and Bible verses. 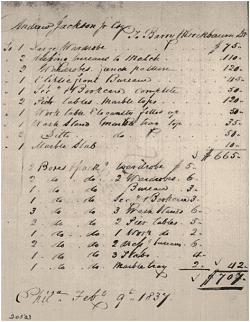 Invoice for Hermitage furniture purchased from Barry and Krickbaum, in Philadelphia near the end of Jackson’s second term. In addition to Sarah Jackson’s sewing and writing table, some of the furniture from Andrew Jackson’s bedroom appears on this invoice.

In November 1836, Sarah and Andrew Jackson Junior traveled to Philadelphia to visit Sarah’s relatives and to make a variety of purchases for the nearly complete rebuilt Hermitage mansion, including furniture, carpets, and fireplace tools. They shopped with seven merchants and spent about $2,300.00 (over $60,000.00 in today’s dollars). One of the purchases was Sarah’s mahogany sewing and writing stand, described as a “work table elegantly fitted up.” It cost $50.00, the same price as the desk/bookcase that currently sits in the Hermitage front parlor. The table included an accessories tray and probably had a silk bag hanging from a drawer-like frame on the bottom of the cabinet to hold work in progress. 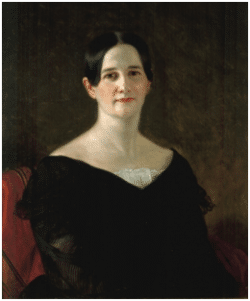 According to Linda Rosenkranz, writing in American Heritage in October 1994, such “sewing stands were designed to provide a convenient surface and storage space for needlework and other leisure of gentlewomen.” In fact, they became “a focal object of refined feminine society.” Sarah likely carried out recreational sewing out at this table such as embroidery or other decorative forms of sewing. In addition, we know that Sarah was an active letter writer so the writing desk also received much use.

We are grateful to Jean Guy and her family for loaning this piece to The Hermitage. It is not only a lovely piece of furniture, but it gives us insight into Sarah Yorke Jackson’s interests and leisure pursuits.