The year 1832 began with Jackson still pursuing his feud with Vice-President John C. Calhoun, whom Jackson accused of secretly siding against him in the 1818 controversy over Jackson’s Seminole campaign in Florida. The episode ended embarrassingly for Jackson when a key witness, called on to prove his charges, instead directly contradicted them.

Indian removal remained a preoccupation for Jackson. The Choctaws began emigrating westward, the Creeks and Chickasaws signed but then immediately protested removal treaties, and the Cherokees won what proved to be an empty victory against removal in the Supreme Court. Illinois Indians mounted armed resistance in the Black Hawk War. In midsummer, a cholera epidemic swept the country, and Jackson was urged to proclaim a day of fasting and prayer. He refused, saying it would intermingle church and state.

A bill to recharter the Bank of the United States passed Congress in July, and Jackson vetoed it with a ringing message that became the signature document of his presidency. In November, Jackson, with new running mate Martin Van Buren, won triumphant reelection over Henry Clay. But only days later, South Carolina nullified the federal tariff law and began preparing for armed resistance. Jackson answered with an official proclamation that “disunion by armed force is treason.” The year closed with Jackson immersed in plans to suppress nullification and destroy the Bank of the United States.

Embracing all these stories and many more, this volume offers an incomparable window into Andrew Jackson, his presidency and America itself in 1832. 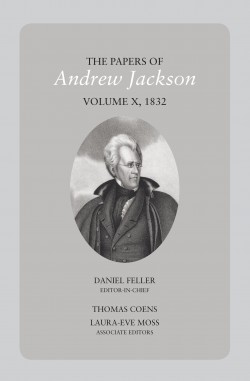