The Jackson’s Go to Washington 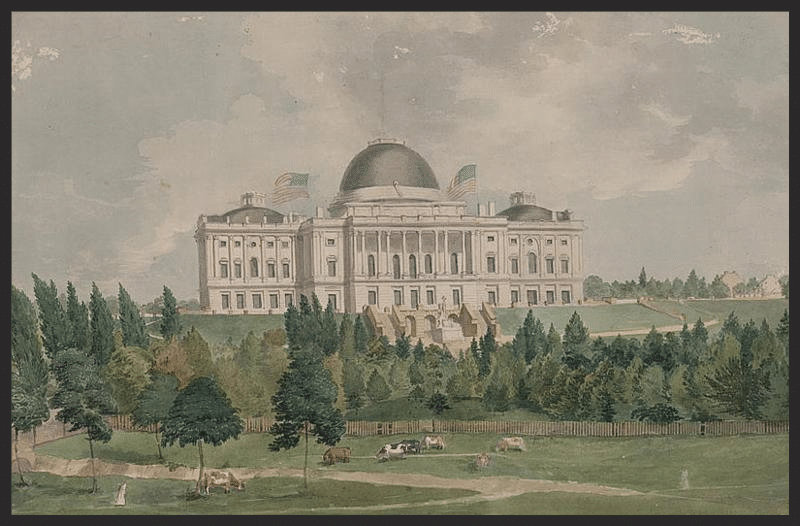 View of the Capitol, 1831.(Library of Congress) Notice the cattle grazing in the foreground.

Here at Andrew Jackson’s Hermitage we have been very focused on the bicentennial of the Battle of New Orleans and the conclusion of the War of 1812. Now let’s jump ahead 10 years to the Presidential election of 1824-25. This election resulted in the House of Representatives determining the winner of the presidential race and Andrew and Rachel Jackson were in Washington for the decision. 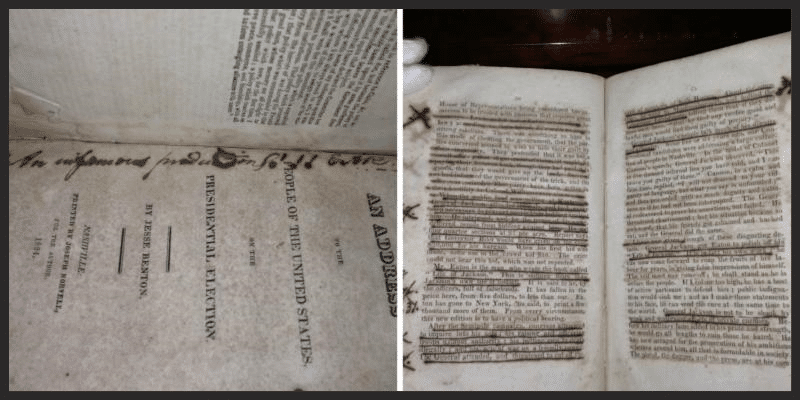 In Jackson’s pamphlet collection in the mansion library there are 10 pamphlets relating to issues in the 1824 election, a four-way race between Jackson, John Quincy Adams, Henry Clay and William Crawford. This pamphlet by Jackson’s old nemesis, Jesse Benton, is heavily marked and described as “an infamous production.”

The Jackson’s trip to Washington was about a lot more than the Corrupt Bargain and the unsatisfactory (for Andrew Jackson) conclusion of the vote in the House of Representatives.  In early November 1824, Andrew and Rachel Jackson and A.J. and Emily Donelson set off for Washington DC. It was not specifically because of the election that Rachel went to Washington with Andrew. In fact, at the time they set out, the results of the election had not yet been determined. The Tennessee legislature elected Andrew Jackson to the Senate in 1823 and he had journeyed alone to Washington for the 1823/24 Congressional Session. (At that time, Congress usually began its session in December with the session concluding in the spring. ) Jackson had promised himself that Rachel would travel with him for the 1824/25 session because he had been lonely for her company. The newlywed Donelsons went along for additional company. 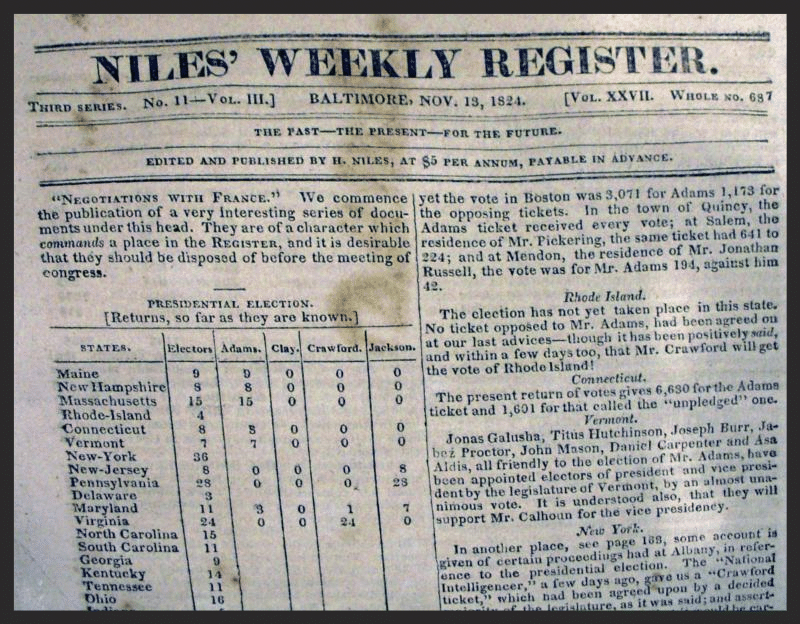 The Niles Weekly Register from November 14, 1824 reports the progress of the popular vote and the tally of the likely electoral vote that was still undecided. The Jacksons had been on the road a week already at this time.

The foursome and at least three enslaved servants traveled by steamboat from Nashville to Wheeling Virginia (now West Virginia) on the Cumberland and Ohio Rivers. At Wheeling, they boarded a private coach for the rest of the trip on the National Road to Baltimore, and then to Washington. The trip took 28 days with no significant breaks or delays.

The solid black line is the National Road which the Jacksons joined in Wheeling. The earlier part of the trip was by steamboat along the Ohio River (the dotted line south of Indiana and Ohio)

Upon arriving in Washington, the Jackson entourage boarded at Gadsby’s on 21st near Pennsylvania Avenue. Peggy O’Neale Eaton’s father had operated this inn prior to Gadsby’s purchase and Jackson and John Eaton had boarded there the previous winter (but the Peggy Eaton issue wouldn’t arise until Andrew Jackson’s first term as president beginning in 1829.) Richard Keith Call and his wife, Mary, Jackson friends, were also boarding there as well as the “Nation’s Guest” the Marquis de Lafayette, just beginning his tour of the United States. This made Gadsby’s very congenial for the family. 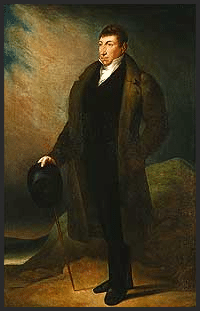 The Marquis de Lafayette toured the United States extensively in 1824/25 in honor of the 50th anniversary of the Revolution. He was greeted enthusiastically everywhere and would visit Nashville and The Hermitage in May 1825.

The family was almost immediately swept up in the Washington social season, although the elder Jacksons generally declined most invitations. As Andrew Jackson reported to his friend John Coffee “…the young ladies Mrs. Call and Donelson at parties when they choose; Mrs. Jackson at the church, and myself harassed by business.”   The theater was another attraction for the young, but Rachel preferred to stay in with Jackson smoking a pipe.   However, Rachel could not escape the custom of social calls where she claimed 50 to 100 people stopped by each day. She did order several dresses and other items of clothing during this time. 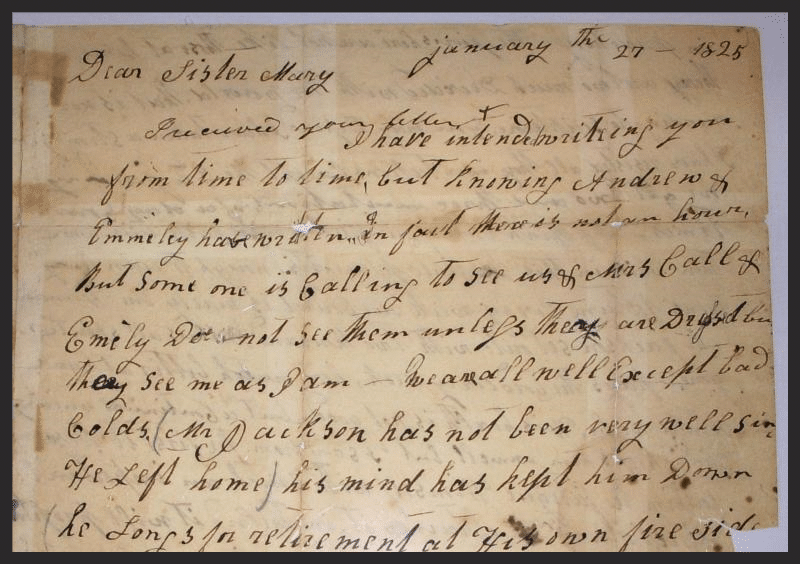 In October 2014, sisters Rachel McAllister and Caroline Merritt, descendents of Rachel Jackson’s brother John, donated their family letters to The Hermitage including one written by Rachel to John’s wife Mary while she was in Washington at this time. As Rachel reported to Mary Donelson, she had “resisted all those invitations Except the 8th January.”

Jackson wrote many personal and political letters during this trip and we have two in the Hermitage collections, both written shortly after arrival in Washington. Jackson wrote to his troublesome ward, Andrew Jackson Hutchings, then about 13 years old, admonishing him to study, attend church and write often. They had left 16 year old Andrew Jackson Jr., Hutchings, and 13 year old Lyncoya, in Nashville to keep up their education. The other letter in our collection was to Edward George Washington Butler, a former ward, in condolence for the death of his brother. 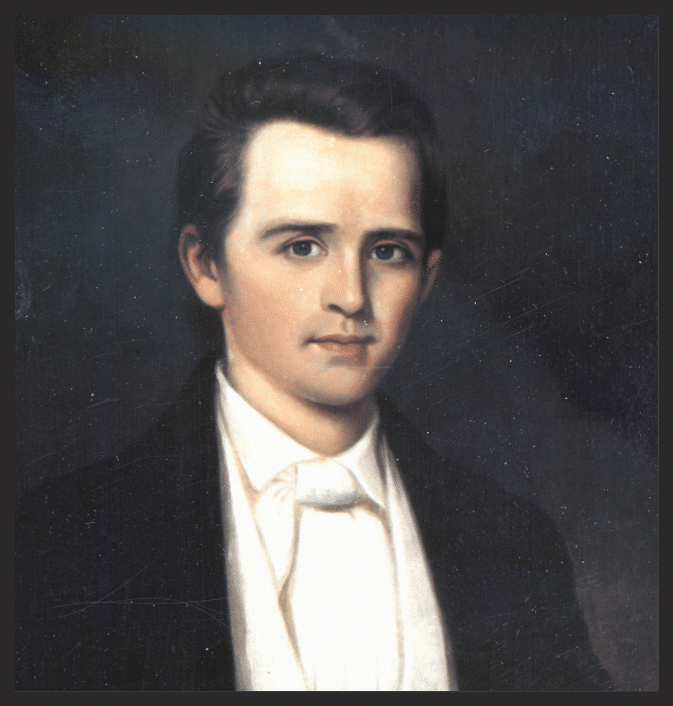 Finally, the election in the house took place and the triumph of John Quincy Adams.   After that disappointment, Jackson wanted to stay for the cabinet confirmations, perhaps to try to prevent Henry Clay being confirmed as Secretary of State.  The Congressional Session adjourned shortly thereafter and the Jackson entourage left in early March for the long trip back to Tennessee. They followed the same route they took traveling to Washington, but made several longer stops for dinners and receptions.