Weathering the Storm – The Impact of Weather-Related Storms

Over the years, Andrew Jackson’s Hermitage has weathered many storms—actual weather-related storms instead of the pandemic storm we are currently experiencing. Even before The Hermitage became a historic site museum, a tornado partially destroyed two important farm buildings—the stable/carriage house and the Triplex. The exact date is unknown but may have been as early as May 1864 when the Nashville Dispatch noted that the Jacksons’ neighbor “Tim. Dodson had his barn, cut house, and fences utterly wrecked.”

On March 19, 1892 intrepid early board members Mary Baxter, Mary Dorris, Novella Davis Marks and Sallie Ewing Gaut “met as appointed; other ladies not present, owing to the exceeding inclemency of the weather; snow being 18 inches in depth.” Indeed, the National Weather Service records this as the heaviest snowfall on record for the city, although the NWS says it was only 17 inches. 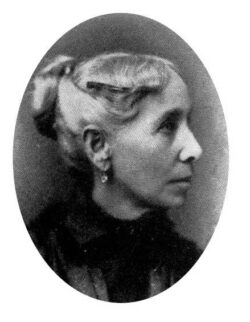 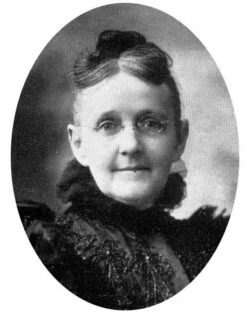 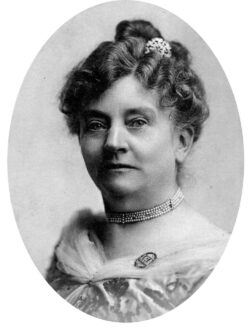 In March 1923, according to the April board minutes, “Over forty trees were blown down on the grounds…” The LHA salvaged the wood from the cedar trees to have souvenirs made for the museum store. In March 1927, it was reported in the minutes, “The cedar trees blown down in 1923, have been made into souvenirs…up to date we have taken in almost $2,000.00 from these souvenirs.” 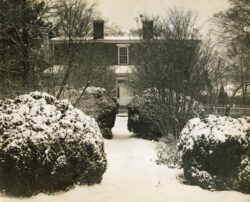 This photograph from about 1930 shows boxwoods and crepe myrtles in the snow. These would be badly damaged in the 1951 blizzard/ice storm.

In late January 1951, Nashville experienced a brutal winter storm with ice, snow and sub-zero temperatures. Called a blizzard in the newspapers of the time, it technically was not a blizzard but an ice storm. For those who lived through it, it was bad enough, regardless of what it was called. There was little damage to structures at The Hermitage, although a radiator blew up in what is now the Administration Building. Andrew Jackson Baker reported that the heat had been off in the mansion for seven days, which caused general dampness throughout the house. The worst damage from this storm was to the garden as tender shrubbery, such as boxwoods and crepe myrtles, froze.

Over the years, windstorms have wreaked havoc with trees on the property, especially the cedar trees along the driveway like this tree, which splintered in May 1968. 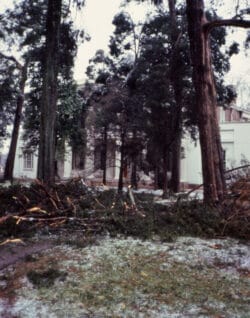 Piles of cedar limbs along the driveway await clean-up after the 1994 ice storm. The aroma of cedar near the mansion was intense.

The historic carriage drive cedar trees suffered greatly in the ice storm of February 1994, as the heavy ice accumulation on their evergreen leaves weighed down and broke off branches. The ice also broke electrical lines. According to the National Weather Service, this was the worst ice storm since the “blizzard” of 1951. Due to icy paths, fallen limbs and loss of power, The Hermitage was closed to the public on February 10-12. Although full power was not restored until February 18, The Hermitage re-opened to visitors on February 13, giving them the experience of the Hermitage mansion before electricity while touring its dim, unheated hallways.

The Hermitage’s worst weather disaster took place on the afternoon of April 16, 1998, when three tornadoes struck the Nashville, Tennessee area. The strongest of the three inflicted heavy damage on downtown, East Nashville and the Hermitage property. At The Hermitage, it was a busy afternoon during the spring touring and school tour season. Even at 3:30 p.m., when the tornado struck, and inclement weather all day had kept crowds at a lower level, nearly 300 visitors and staff on the grounds—100 of them children.

The tornado that passed over The Hermitage was an F3, mid-range in the Fujita Tornado Scale, with windspeeds of 158-206 miles per hour with the ability to uproot most of the trees in its path. In the span of about two minutes, 1,500 trees were toppled or badly damaged. These included many “historic” trees: The cedar-lined original driveway, the hickory trees by Andrew Jackson’s tomb, many 200-year-old tulip poplars and the largest beech tree in Davidson County. 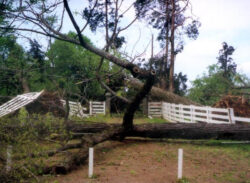 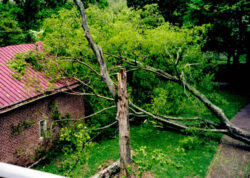 The smokehouse sustained damage from fallen trees after the 1998 tornado.

Nearly all historic buildings suffered damaged, tombstones in our three cemeteries were broken, and nearly every fence on the property was smashed. The site was closed from April 16 to May 18 due to hazardous conditions. Even after reopening in May, the front yard area had to be closed off. Although damage totaled almost $2 million, not one person on the property that day was injured, and no collection object was lost. Recovery took years and the help of an incredible number of people and organizations.

A falling tulip poplar badly damaged the front gable of the Hermitage Church. 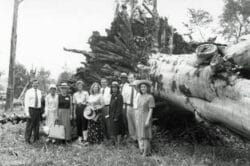 CEO Jim Vaughan and members of the Board gather around the fallen beech tree in the front yard of the mansion.

The flood of May 2010 caused havoc in different ways than the tornado 12 years earlier. 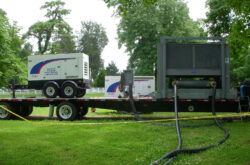 For several months, while awaiting delivery of a new chiller for the Hermitage mansion, a temporary set-up of a chiller and a generator on a flatbed trailer stood in the side yard of the mansion so that reasonable climate-control could be maintained to protect collections.

Although no major damage resulted from rising water from creeks on the property, flooding in the basement and below ground utility spaces from rain overwhelmed pumps and damaged HVAC equipment.

Although The Hermitage escaped significant damage in the March 2020 tornado, a May 3rd derecho (straight line winds and lightning) produced tree damage and electrical problems. It took several weeks to repair damaged equipment and clean up the grounds. 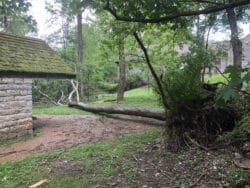 Tree blown down in the derecho on May 3 near the Springhouse.

Although weather events will always be a challenge, The Hermitage has emergency plans in place to assure a quick and organized response.

The Andrew Jackson Foundation needs your help now more than ever. Your donation will ensure the work began more than 130 years ago continues. Please make your gift to the Weathering the Storm campaign.