Weathering the Storm – The Impact of World Wars

Two of the most challenging periods in the life of The Hermitage as a historic site museum were World Wars I and II. The problems faced by the organization and the results of those challenges were different for both wars, but both present a clear line of demarcation – things after the war were very different than they had been before the war.

The U.S. entrance into World War I was slow, as most people fiercely hoped the country would avoid being drawn into a European war. For more than two years after the start of hostilities in 1914, little effect would have been noticed in the countryside around The Hermitage. Suddenly, in December 1917, several months after the U.S. had officially declared war, news came that the government under the direction of DuPont was going to build a huge plant—the largest in the world—to manufacture gunpowder in the bend of the Cumberland river north of The Hermitage. Suddenly, this quiet, isolated farming area was the center of a huge manufacturing effort spread over more than 5,500 acres. 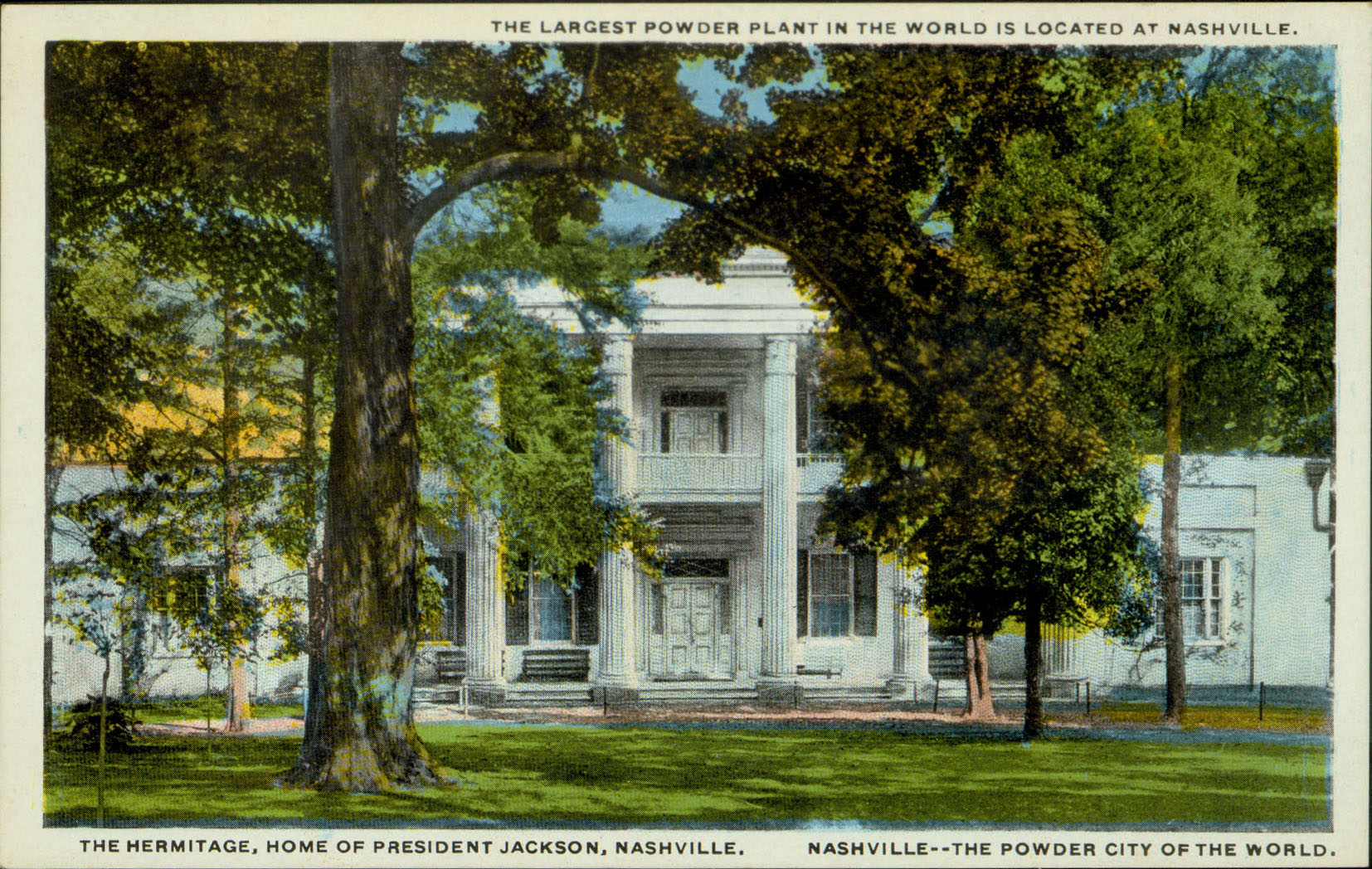 Seventy-five thousand workers descended on Hadley’s Bend in order to construct and operate the plant and the support facilities, including worker housing. In February 1918, almost the entire agenda for the Ladies’ Hermitage Association (LHA) Board meeting focused on issues relating to the powder plant.  Wages were rising, farming would be difficult because all local labor was focused on the powder plant, and the railroads could no longer offer the LHA railroad passes because the railroads had come under government control. In order to move supplies to the powder plant, the railroads built a spur line through the Hermitage property to the plant in just one month. Property owners adjoining the Hermitage farm subdivided and sold building lots, anticipating that not all powder plant workers could be accommodated by the company housing.

It was at this time that the LHA began to lobby the state for control of all 500 acres of the Hermitage property when the Soldiers’ Home inevitably closed. They wanted to keep a larger buffer between the Hermitage mansion and this changing environment. But the powder plant also brought increased visitation, both by VIP visitors who combined a trip to see the wonder with the opportunity to also view The Hermitage and by the thousands of workers from the plant searching for a diversion in their off hours. In May, Mr. Baker, the Hermitage caretaker, reported that the plant workers began to show up as early as six in the morning “lounging in the house all day.”

Then, with the Armistice in November 1918, as quickly as the powder plant came into being, it began to close down. But many of the changes it brought to the neighborhood were here to stay. By the early 1920s, DuPont had taken over part of the plant to manufacture textiles, and new housing was built in the area to accommodate workers. New roads and bridges over the Cumberland River changed traffic patterns. The railroad spur, crossing the Hermitage entrance road, brings supplies to the manufacturing operations in Old Hickory to this day.

The challenges brought by World War II were also huge and lasted for a longer time, but in many respects, they were the problems experienced by everyone all over the country. Gasoline and rubber rationing discouraged visitation, although through the war years, more than 40,000 service men in uniform visited The Hermitage for free. Prices and wages rose again in response to the changing labor market, the growth of the armed forces and diversion of much manufacturing to war-related needs.  Supplies such as coal and kerosene were difficult to obtain.

In 1942, the Army began a series of training exercises for airborne, infantry and armored troops in Middle Tennessee. Headquartered at Cumberland University in Lebanon, the Tennessee Maneuvers brought more than 800,000 soldiers and their equipment including tanks and other armored vehicles to the area to train because the terrain resembled France and Germany.  Although the exercise area did not officially include Davidson County, the proximity of Wilson County alarmed the LHA Board. They requested that the 25 acres surrounding the Hermitage mansion and garden be declared off limits to the exercises, and the Army agreed. Twenty-two signs were placed around the property declaring the area “Off Limits for Troops.” Even so, in March 1944, Mr. Baker reported that the government would be supplying lumber to repair Hermitage fences damaged during the maneuvers.

Davidson County Schools, in cooperation with other agencies, made a more pleasant use of the Hermitage property by planting a Victory Garden on 32 acres fronting Lebanon Road. In 1942, they grew 10 acres of tomatoes, resulting in more than 6,000 quarts of canned tomatoes. Green beans, potatoes, lima beans, beets, cabbage, onions and other vegetables were equally prolific. Some of the food went to supply school lunches the next winter. The Board happily granted permission to repeat this project in 1943, with the result producing almost 75,000 quarts of canned vegetables. The Victory Garden program continued throughout the war. 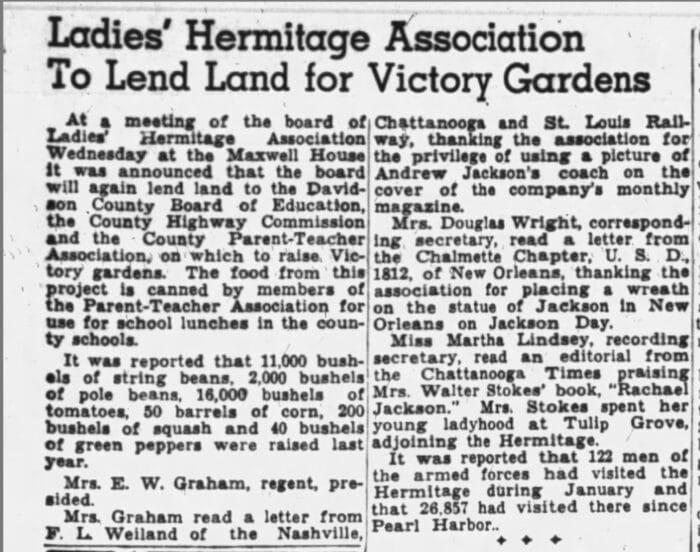 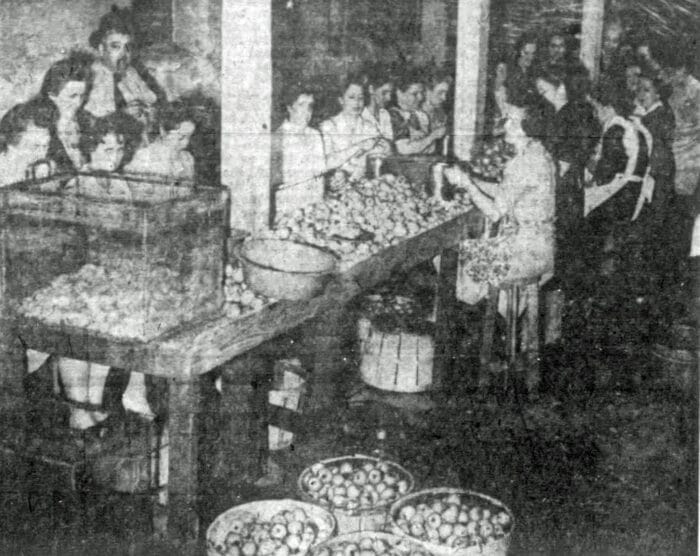 Photo of produce from Victory Garden being canned, courtesy of Nashville Banner, April 12, 1945

The disruptions of war brought different challenges to The Hermitage than the financial problems encountered in the early years of The Hermitage as a historic site museum.  But people still came to visit The Hermitage, and activities and operations were adjusted to accommodate the new situations.

Fundraising has been essential to our organization since its founding, and now, more than ever, your support is critical. Your gift will ensure the legacy and impact of this National Historic Landmark will continue for generations to come.

We need your help. Please make your gift to the Weathering the Storm campaign.